Jennifer Maruno’s Roof for a Moose 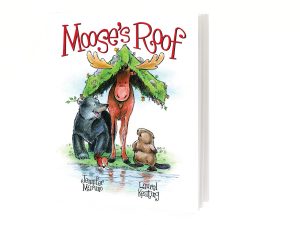 When Moose stumbles upon a newly-constructed picnic pavilion at the park he is struck by the fact that all his friends seem to greatly admire the roof of this structure. “How do you know so much about roofs?” he asks them.

So Squirrel, Beaver and Bear explain about how they each build their own roofs to potect themselves from the elements. After giving this some thought, Moose decides that he ought to have a roof over his head as well, so this helpful trio proceed to build one for him right on top of his antlers.

But with all those branches, leaves and stones on his head, Moose soon discovers that he can’t sleep or eat or even walk without stumbling. His well-meaning friends offer their own advice but ultimately Moose discovers for himself that the sky over his head is the very best roof for him.

In the tradition of all good animal tales, Maruno’s delightful picture book features a cast of amiable animal characters who work together to try to help a friend, first by building him a roof of his very own and then by offering suggestions for how he can deal with the problems it poses.

As children delight in Moose’s saga, they will also be surreptitiously introduced to some basic information about squirrels, beavers and bears. Each of these creatures draws from their own personal ways of doing things to come up with suggestions for Moose. For example, Bear recommends that Moose try taking just one long nap instead of worrying about trying to lie down to sleep every day, while Beaver advocates using one’s tail for balance.

Moose’s realization that he is different from his friends and needs to find his own solution to his dilemma–the solution that is just right for him–provides a gentle reminder to the book’s young audience of the important truth that we aren’t all the same and that’s okay.

However, much of the story’s appeal lies in its illustrations. Laurel Keating gives the animals delightfully animated expressions using an economy of lines that capture the good-natured spirit of the story and a sense of playfulness. While the colour palette consists largely of earth tones, there is still abundant colour in the illustrations and the woodland landscape is simply but aptly rendered.

Together, Maruno and Keating have crafted a warmhearted and winsome tale with a subtle but significant message.