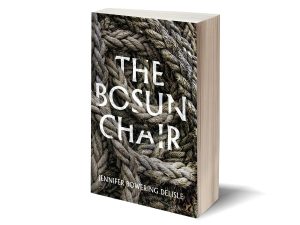 Identity formation is a slippery, shifting and mutable affair, especially for children of immigrants. In the absence of extended family and a village infrastructure with common memory, the gaps in family history can be keenly felt. Being the child of immigrants who fled Poland after the Second World War, this was my experience, and it’s the experience that Jennifer Bowering Delisle captures so lyrically in her book The Bosun Chair.

“When I was growing up, I was angry with my parents for leaving Newfoundland,” confesses Delisle. “I wrote sentimental stories and poems set there, describing the pattern of tide against the rocky shore or the smell of salt in the air. On visits from St. John’s, my grandfather told tales of a conspiracy behind Confederation, how St. John’s was draped in black on the day Newfoundland joined Canada. We were taught in school that Canada is a mosaic. My friends were Ukrainian, Indian, Chinese—we were all born in Edmonton. My heritage was Newfoundland. This was where I looked for rootedness, a kind of belonging.”

In Delisle’s case, it was a family that moved within a country, but uprooting themselves in that way still has significant consequences for children born into the new or “foreign” landscape. When that dislocation happens, instead of being born into a sense of continuity, we have to actively search out who we are and make sense of our place in the world.

In my case, my grandparents were largely silent about their life in Poland, and I only ever met one relative, my great aunt, who didn’t speak English, my only language. She visited us for just 45 days and then went back behind the Iron Curtain, never to be seen again.

With what little information I was able to glean from my family over the years, I wrote poems and made a short film as a way of making sense of my origins. But there were always gaps in this construction of identity and it is those typical gaps that form an integral part of how Delisle has structured The Bosun Chair. It is a hybrid story that incorporates poetry, memoir fragments, news clippings and letters in a chronological yet elliptical narrative.

On the one hand, that structure is a bold choice and solves the dilemma that many people who do genealogy research have when trying to fashion a coherent story out of it all. I often have students who attend my writing classes believing that the story of their ancestry will reveal itself just by the mere fact of so much accumulation of facts, documents, photos and other artifacts. They soon realize that research and story are two different animals.

How we tame those animals into a coherent flowing narrative becomes the next challenge. The Bosun Chair artfully compiles Delisle’s research into loosely connected fragments and in doing so she allows the structure to mimic the gaps we necessarily experience when constructing an identity through snatches of stories.

On the other hand, it’s this exact brave choice in structure that makes The Bosun Chair a challenge to read. It doesn’t rest easily within the conventions of memoir and a lot of the work of constructing the story is up to the reader. However, the element that makes this challenging read such a rewarding one is Delisle’s  deft hand at planting evocative images that refer back to each other and build the narrative layer by layer. For example, in the Ballycater chapter, we’re introduced to the ice blocks called ‘ice pans’ that would fill the harbour and on which kids would play, trying to jump from one to the next without falling into the sea. Later in the chapter when Delisle talks about her ancestor who left the area: “She leaves this place to teach school in other towns on the coast. She worries about for her pupils balanced on the ice pans.” Then this remark from the narrator: “Stories too slippery to stand on.” The link is beautifully made between the physical location, the imagined place and the precariousness of forged identities.

It’s this poetic linking throughout the book that reminds us of the gaps in our own identity. In the end, Delisle helps us realize that construction of identity is an ongoing, slippery and deliberate journey.