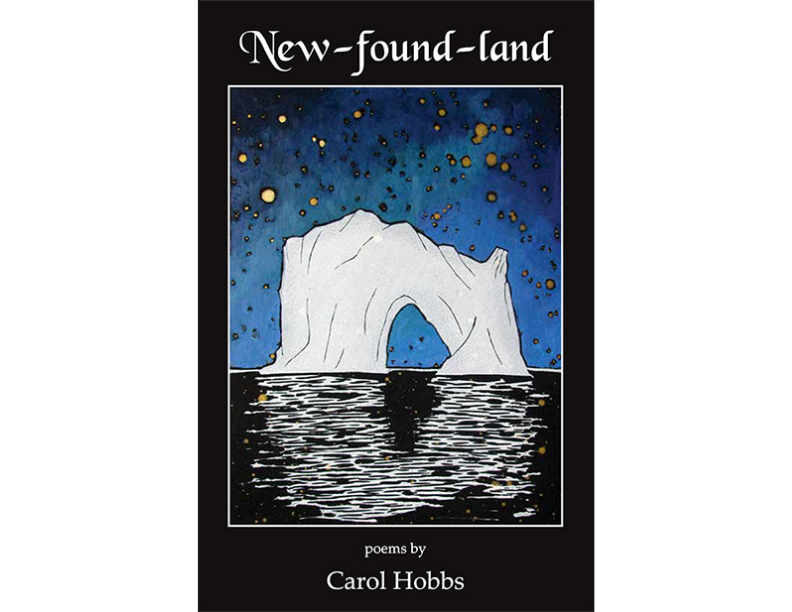 In Carol Hobbs’ first book of poetry, New-found-land, the poet brings the perspective of someone who has spent equal parts living in and leaving Newfoundland, a place which she still longs to be as an expat living in Boston. What she left behind is a “Perfect World” (the first section of the book, detailing the poet’s Newfoundland upbringing), later destined to a life in “Exile” (the second section, which predominantly shares her life in America, punctuated by reminders of home).

In the first section, common outport themes like hunting, fishing and foraging are recalled with the innocence of childhood memories: “The caribou’s eyes are open so I sing to it. . . My father hums along, and cuts away the skin from the severed hind quarter” (p.28). Familiar references, for example, to the 1992 cod fishery collapse, offer original insights: “the people scatter into the dark quadrants of the mainland, broken, their mouths open—the desperate thirst of them” and “Houses flake paint over stones, over gardens… boats sinking into indiscriminate ground” (p.36). Her language is evocative and lyrical, for example, describing a whale’s eye as “oily in the dark cup, me mirrored in the eye-slick” (p.3); while, of a bonfire, she writes: “Sweet myrrh and spruce needles tangled like worms in the knit of sweaters… flankers spit into the night, fell back smoking onto our hair” (p.13).

For those raised in the province, they’ll especially appreciate the references only a Newfoundlander could muster such as to mom’s preordained suppers (“Fridays, salt fish in drawn butter”) (p.7); a pantry of traditional bottled goods (“Cabbage pickles with bright mustard and black beads of pepper” p.19); and nan’s quilt-making (“On hands and knees, she mapped out the world of the garment” p.15).

In the second section, Hobbs shares milestones from adulthood like the failing health of her parents—first her mother (p.40), then her father (p.59); how she became a writer (in line at a bookstore, p.64-65); and her encounter with 20th-century American poet, John Ashbury (1927-2017) (p.66). Most telling is her poem, Exile, where she reveals the parts of herself that have persisted, even after considerable time away: “Some accents take longer than others to dissolve” and “I like to be called my love, my lass” (p.71).

While most of the book is an ode to family and culture, the final poem, “New-found-land,” pays homage to land, sea and wildlife: “In the beginning Conception Bay was gold in that soft belly of kelp. There were green rocks smoothed and thrown to oval, and squids full of circular scars” (p.73). It’s a perfect note on which to end this poetry collection – an enjoyable read for Newfoundlanders, expats and visitors alike.