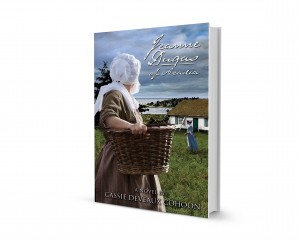 It was a long time since Jeanne had been able to lean on an older woman. Anne, Charles’s wife, took her under her wing. She noticed Jeanne’s tenseness and her air of worry and apprehension. In fact, she thought Jeanne looked old beyond her years. The morning after their arrival, when Anne sympathetically asked her what was wrong, Jeanne broke down in tears. Anne took her in her arms.

“I wouldn’t blame you if you did, Jeanne.” Anne sighed. “You’re not telling me everything, are you?”

Cassie is a researcher and author of books dealing with the history of the Acadian people, with a special interest in the stories of the women of Acadia. Born in the Acadian village of Chéticamp on Cape Breton Island, her Acadian heritage goes back to the early days of Grand Pré on her father’s side and Beaubassin (now Amherst) on her mother’s. She has lived in New York City and Paris, France, and now makes her home in Montréal, Québec.