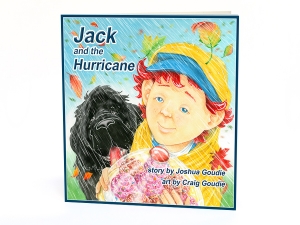 When it looks like a hurricane is going to ruin his cousin Erin’s birthday party, Jack takes matters into his own hands. He grabs his grandmother’s cupcakes and sets out for Erin’s house. Along the way he encounters numerous others battling the storm. They each advise him to go back home – but not before asking for one of his scrumptious-looking cupcakes. When he finally makes it to Erin’s house he discovers that the party has been postponed. Then Jack’s grandmother, along with all the people he met on his journey, arrive…with a full plate of cupcakes in hand. With so many people and all of those cupcakes, Erin has her party after all!

This lively tale manages to illustrate the destructive fury of the hurricane. Jack conjures up some fanciful imaginings to explain why the people that he meets are out in the storm which also adds sly humour to the tale. The illustrations are vibrant and colourful, and the facial expressions tell their own story as they capture the wildness of the storm, the bewilderment of the various people Jack meets and his grandmother’s tremendous relief to find him safe. An entertaining tale (that left this reader yearning for cupcakes!).