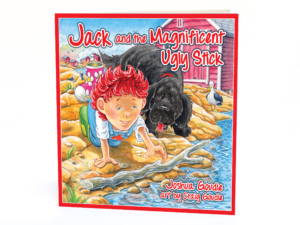 At the beginning of Jack and the Magnificent Ugly Stick, Jack’s all ready to head out with his grandmother for a day of fishing—but his plans go awry when his grandmother can’t find her second rubber boot. Jack knows his grandmother loves fishing and doesn’t want her to be disappointed, so he takes the single boot and sets out to find its mate.

He starts his search at the beach, thinking she may have left it behind the last time she was there. But instead of the missing boot, he finds singer/songwriter Matthew Hornell. Jack tells Matthew about his search and all thoughts of fishing vanish when Matthew shows Jack how to use the single boot to make an ugly stick by nailing a piece of driftwood to the inside of the boot. When Jack learns to use the ugly stick as a percussion instrument, he decides (since his grandmother loves dancing even more than fishing) to take his new instrument home and show her how it works. Matthew grabs his fiddle and together they head toward Jack’s house. Along the way they meet other musicians, including Geraldine Hollett and the rest of The Once, and Andrew James O’Brien and Catherine Allan of The Fortunate Ones.

Each time Jack meets another musician, they give him something else to add to his ugly stick (bottle caps for shaking and a tin can for tapping). Then they join Jack and walk with him back to his grandmother’s house for the ultimate kitchen party.

Although this is a picture book, it isn’t just for young readers. In fact, the text may actually be a little too dense to hold the attention of a three- or four-year-old. But slightly older readers (and adults with a love of East Coast music) will certainly enjoy the journey.

In Jack and the Magnificent Ugly Stick, gorgeous illustrations and a fun story line work together to introduce young readers to a traditional Newfoundland instrument that’s bound to capture their imaginations and spark their creativity.