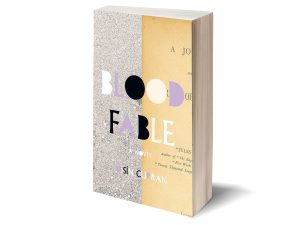 The new novel by Cape Breton’s Oisín Curran–appearing roughly a decade after his debut, Mopus–is a delicate, fragile, elegant and occasionally exquisite piece of storytelling. What the book is about, exactly, is open to interpretation; you and I could read the novel and come away with entirely different opinions.

The story is set in and around a Buddhist community in Maine in 1980; although, judging by the maturity of the narrator’s vocabulary and the way he builds his sentences, it’s being told to us many years later, by an older narrator looking backward. At the time the story takes place, the narrator was 11-years old; his mother had been diagnosed with cancer and the outlook was bleak. As a way of escaping from the sadness of his real life and perhaps to offer his parents a similar escape, the boy constructs an elaborate tale of a young girl (himself, perhaps, in a past life) on a glorious quest–a tale of heroes and villains, of exotic lands and sailing ships, of passion and discovery.

Whether the story is, indeed, a remembrance of a past life, or (as the novel’s title suggests) a fable crafted by a boy with a wondrous imagination, is, for the most part, left up to the reader to determine. Curran seems unwilling to make a definitive statement about the story the boy tells and that’s just fine. Giving either interpretation the weight of finality–choosing for the reader one interpretation over the other–might bring the story crashing down upon itself.

The author’s visually evocative, nuanced writing propels us through the book, sweeping us up and carrying us through the narrative like a boat on an ocean wave. Just listen to this:

And this, a description of a bookshelf:

The long sagging lines of volumes had the upright disorder of teeth.

We get the sense that every word was carefully chosen, every sentence carefully constructed, to make us ask what is real and what is fantasy. To make us not just read the story, but become a participant in it. An ambitious undertaking, beautifully executed.

David Pitt has been writing about books for more than 30 years. His column about paperbacks appears monthly in the Winnipeg Free Press, and he contributes regularly to Booklist, the magazine of the American Library Association.