Into the Current is Exquisitely Explicit 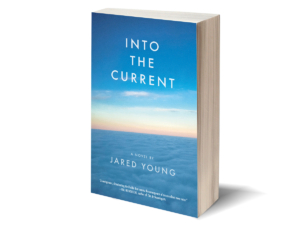 Where to begin with reviewing Jared Young’s first novel, Into The Current? Actually, the better questions would be “When to begin?” or “With whom to begin?”

The story begins with the narrator and protagonist, Daniel Solomon, telling his tale to someone he refers to as “my love.” He begins with a description of what started out as an ordinary, uneventful flight from Bangkok, traversing the Pacific Ocean while observing the other passengers around him, daydreaming about a girl he knew in high school, and carefully minding his treasured collection of Suicide Squad comics.

Then we are jolted along with Daniel as the plane begins to break apart, while Daniel helplessly watches the other passengers, not to mention his Suicide Squad comics, being sucked out of the aircraft into the abyss of the atmosphere.

Daniel finds himself floating in the air along with the plane wreckage that has also come to a halt. Everything is floating and Daniel recalls moments in his life; many defining moments and some insignificant moments. Moments with women – his grandmother, his mother, his first love and the American girl he fell for in Thailand. He recalls sexual encounters (real and fantasized) and moments of violence, disappointment, clarity, confusion, infatuation, love, anger and sadness.

Many of the novel’s chapters include stories and memories – almost like mini chapters within chapters. If Daniel’s life is meant to be flashing before his eyes as he floats above the Pacific Ocean it is doing so in a very nonlinear fashion; however, this nonlinearity brings the reader to this limbo state where Daniel remains. Daniel is confused; he doesn’t know why he is floating in the air amid the wreckage of a plane. We, the reader, are also confused, but we can’t help but turn the page to discover what thoughts and memories Daniel’s mind travels to next, and also wonder why they are travelling there. Although his storytelling tends to be all over the place, jumping from one memory to the next, after a while, the stories within the mini chapters begin to merge and we, the readers, begin to see where Daniel’s story is going.

As I finished reading this book, I had to once again read the description of the author to confirm that yes … this is indeed Jared Young’s first novel. The writing is so exquisitely explicit. Some passages of this novel would cause the prudish readers to spit out their cereal. The sexually inexperienced could consider themselves at least a little bit experienced after reading Daniel’s very precise descriptions of his sexual relations. Readers who were bullied or abandoned or tormented or assaulted or exploited in their younger years will likely let out a sigh, a gasp or even a tear of appreciation for Mr. Young, an author who has found a way to write what we are thinking, but don’t know quite how to say ourselves.

Into The Current holds us, stranded in the air currents with Daniel, while taking us through the personal experiences that have impacted him most, until he brings us back to the current point in his life. It is an excellent book that will make you want to re-read the final few pages to confirm that yes, you have reached the end of Daniel’s story and that’s it. That’s all.

Into the Current
by Jared Young
Goose Lane Editions

Genevieve MacIntyre majored in English Literature at St. Francis Xavier University (BA 2003), studied Journalism at the University of King's College (BJ 2004), and completed a Masters degree in Communications at Mount Saint Vincent University (MA 2016). She currently works in communications and alumni relations for the Faculty of Arts and Social Sciences at Dalhousie University.