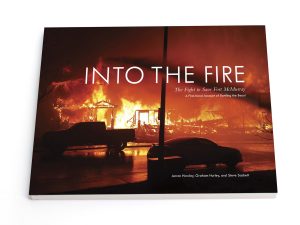 It was one of the biggest natural disasters in Canadian history. It caused almost nine-billion dollars in damage, forced the evacuation of nearly 90,000 people and made headlines around the world. Now this tragic event, which occurred in Alberta just over a year ago, is recounted in a poignant, frank and unique way in the new book, Into the Fire: The Fight to Save Fort McMurray, A First-hand Account of Battling the Beast.

Into the Fire is written by Jerron Hawley from Port Hood, Nova Scotia, Graham Hurley of Fort McMurray and Steve Sackett of Calgary. Hawley, Hurley and Sackett are three firefighters, part of a large contingent of Canadian first responders who rushed, without hesitation, into what has been described as “hell on earth” in order to battle multiple, fast-spreading and startlingly dangerous fires, beginning on May 3, 2016.

Hawley describes the scene as they rushed towards the mayhem. “Standing on the back of the truck, I looked at the distraught faces of people in their cars stopped bumper-to-bumper on the highway. People were holding their hands up as if they were praying for us as we headed into that black cloud of uncertainty. I’ll never forget it…It was starting to sink in. This is the one…”

What makes this hard-cover part pictorial a page-turner is its gripping style; all three men have drawn from verbatim field notes and awe-inspiring behind-the scenes photographs taken during many gruelling days over the course of this staggering national-emergency response. The book’s layout and design focuses attention back on what is most important: this rare glimpse into the mind of a first responder as a catastrophic event is unfolding.

Their pictures and words, when combined, paint a raw picture of the unwavering brotherhood and sisterhood among our emergency personnel, the fear, exhaustion and resilience, which is part of their world, as well as the sense of community, commitment and unparalleled concern they have shown for peers, loved ones and complete strangers.

The three perspectives are intertwined with factual accounts of strength, fear and love. Hurley recounts his reaction, deep into the response and while wracked with exhaustion, to finally getting days off:

…I felt guilty on some level for leaving. …The highway was desolate. I had never seen it so empty for so long. I was about ninety kilometres outside of Fort McMurray when my emotions finally caught up with me. I felt my jaw drop. I remember whispering, ‘Oh my god’ to myself, and I wept. What had happened? The things I had seen and done. Was it even real? The pain in my chest, the tears streaming down my face were proof that it was.”

Besides being gripping, Into the Fire is also an educational piece; the three firefighters explain in some detail how the fire attacks were done.

Into the Fire: The Fight to Save Fort McMurray
Jerron Hawley, Graham Hurley and Steve Sackett
McClelland & Stewart

Janice Landry has been a journalist for 28 years and is a former television reporter and anchor with CTV-Atlantic. The Legacy Letters is her fourth book.