In Pursuit of Justice: Just Us! Coffee Roasters Co-op and the Fair Trade Movement 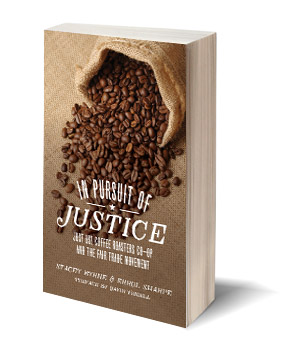 The Beginnings [of Just Us! Coffee Roasters Co-op]

Jeff went home and shared his excitement with Debra and their friends.

The Unión de la Selva, a great co-op steeped in fair trade, wanted to sell them coffee. The only catch was that they wanted to sell seventeen tons, a full container, costing about $70,000. The purchase of a large quantity was necessary because of the problem that the Chiapas co-op had in getting the coffee from their plant to the port. In the past they’d had truckloads of coffee robbed on the mountain roads. They only way they could secure the movement of the coffee was to get off-duty army people who were connected to the army by satellite to travel in front and behind the trucks. For this reason they had to sell a large amount of coffee to justify the cost of transporting it. Jeff said: “It was pretty scary to me but I presented it pretty positively with not much of a downside to it. [But] I kept thinking, ‘What have I got us into?’ But for some reason, Debra agreed. I guess she trusted me more than I trusted myself.” So Debra, Jeff, Ria, David and Jane started delving into all the practical aspects of making it happen — incorporating a business, forming a co-op, arranging financing, making practical plans, like how and where to roast, and constructing a business plan. “It was all new to us,” says Jeff. To buy the coffee, Debra and Jeff had to put up their house as collateral to raise the money. They undertook to buy the green coffee without having any knowledge of coffee roasting and without any customers. Jeff says: “So, it was really kind of a crazy thing to do, but it was also amazing.” He describes how they could have ended up in “dire straits.” He did have his education and social work background to fall back on but they could have lost their house.

Jeff continued to communicate with the Unión de la Selva co-op by phone. In April 1996, Debra, Jeff and Ria travelled to their first coffee conference, in Minneapolis, where Jeff again met with representatives from the Unión de la Selva, who now suggested they take ten tons. This made it easier.

Arrangements for the first shipment of coffee were made in April 1996, and the first container was delivered in June. Jeff’s excitement is still evident as he says, “It was wonderful coffee. They were a really good co-op and it was really good coffee. It got us off to a really good start.” Jeff enthusiastically describes how the co-op provided them with a variety of coffee. Much of it was regular coffee, which has two seeds per cherry, but some of it was peaberry, which has only one. Then there was maragogype, a very large bean — two or three times the size of a regular bean — which did not grow in many places. Again Jeff says, “It was a wonderful coffee.” They nicknamed the coffee Monkey’s Uncle because no one could say maragogype. Jeff said people were still asking for Monkey’s Uncle coffee in 2008.

Just Us! had ten tons of coffee coming to Wolfville with no roaster and no place to store it. Coffee can be stored successfully for some time but only if the humidity and temperature do not get too high. If it is too hot and humid the coffee can deteriorate to the point where it is unusable. As well, if it is too dry the flavour of the coffee will suffer.

Debra, Jeff, David, Jane and Ria, the then full membership of the Just Us! co-op, had hoped to set up the roaster in an old brick public works building. However, the town of Wolfville was concerned that the building was not structurally able to handle the weight of ten tons of coffee. So they had to scramble for a place. With the help of a supportive real estate agent, Peter Fuller, who was interested in what they were doing, they found a landlord in nearby New Minas who was willing to sell them a small house and take back the mortgage. “Peter,” says Jeff, “really should be named an honorary member of the co-op.” They did not have to pay anything down so they were able to put their money into cleaning up the basement, which Jeff describes as “quite a mess…” We had to make it toothbrush clean so we could have a place to store our coffee.” He describes how the basement was only six feet high so they had to cut a hole in the floor to put in their first roaster.

“That,” says Jeff, “was quite neat because people could come into the house and look down through the floor and talk to the [coffee] roaster.”

Another hurdle presented itself just after they moved in to the building. They had envisioned only a wholesale operation but the zoning by-laws of Nova Scotia’s Kings County would not allow them to operate just a wholesale business in New Minas. It had to include a retail component. Undeterred, they opened a retail café, a daunting task given that the whole building upstairs and down was only 800 square feet. But they persevered. The retail outlet drew people to the site, and this worked to their advantage. Word of mouth quickly brought people to see what “we were doing with this coffee roasting,” says Jeff. As it turned out the café was a great way to get the word out about the coffee and fair trade. What had first appeared as a problem turned out to be a stroke of good fortune.

The first coffee-roasting machine was purchased with the help of a grant from the Atlantic Canada Opportunities Agency — a federal government regional development program. Now they had a machine but no one to do the roasting. But once again persistence paid off. Jeff found a place in New York City that was offering roasting courses. He went to New York, stayed with the son of a friend, took the course for a week and learned the basics of coffee roasting. This initial course was followed up with other courses in the United States. “We just started roasting,” says Jeff, “and taking it [coffee] out to people.”