In Memory of Publisher Joe Blades 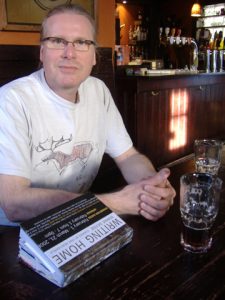 “Joe fell into the mode of a true small-press enthusiast,” said Susanne Alexander, publisher at Goose Lane Editions. “As a writer, publisher and broadcaster, he was committed to the written word.”

Colleagues remember Joe as eccentric, amiable, well read, well travelled and a joy to be around.

He served as former president of the Atlantic Publishers Marketing Association, one of many leadership roles he held in the arts community over the years.

Joe’s friend, Ottawa poet and novelist Rob Mclennan, noted on his blog that Blades was a hands-on mentor who took pains to acclimate him to New Brunswick’s literary landscape. “It is striking for me to realize that Joe was an early mentor to me and my activity—even acting at times as an older brother—in a hands-on way that so many others I would consider mentors and supporters during those early days of my writing life simply didn’t…”

Mclennan’s post is a beautiful and personal tribute, noting elements of the man most wouldn’t know: “There were things about Joe that were constant: his expansive notebook, where phone numbers, emails, appointments and first drafts of poems were collected…He collected ‘lost dog’ posters he pulled from telephone poles.”

This past week he was memorialized via social media by many writers from across Canada:

Sad to hear about the passing of Fredericton poet and publisher Joe Blades. He gave a lot of people their first published book, including mine almost 20 years ago. He’d joke but always kick himself for letting the misspelled “forward” make the cover. https://t.co/nZOJsbp7mq pic.twitter.com/GxUxDxWI36

The FDLC is saddened by the news of the passing of Joe Blades. He was a former executive member and a tireless worker for the council.

In 2009, I was doing some research at UNB & ended up hanging out with Joe Blades at Alden Nowlan House. He was so kind & friendly & gave me one of his books.

He also showed me one of his most recent handmade journals: incredible documents of poetry & ephemera!

Today we lost another member of our community. Our hearts go out to all who knew Joe Blades. This is “Bone Etchings,” from In the Valley of the Shadow of Poets’ Corner (above/ground press, 1994) https://t.co/nw3l54eGSE

Joe Blades had become such an integral part of Fredericton’s landscape. I was alway running into him. A few weeks ago I saw him walking down Regent. Joe, you will be missed. Despite all the travelling you did over your life, your spirit will always be with us in Fredericton. https://t.co/XPPDBiVxyR