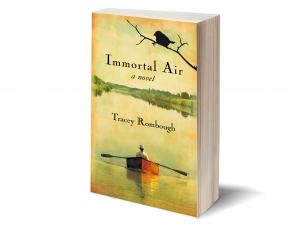 Desperate now to have the basket, he gestured for Madeline to remain seated while he went back to rummage through the steamer trunk. There had to be something in this jumble of forgotten items – something worthy of exchange. He noticed a blue velvet pouch tucked into the corner of a smaller box of thread and wool. He pulled open the knotted cord and found a tarnished pair of antique sewing scissors. Hand-forged and stamped with pivoted blades and elaborately decorated handles, the scissors had come over from Scotland on the Hector. His great-grandmother Janet had given them to her daughter who in turn gave them to Jessie Cameron. Useful. Beautiful. Satisfied that this was a fair trade, he handed the woman the preserves and the velvet bag containing the scissors.

“My mother thanks you. She loves these berries. This fruit will be a delicious treat for us. Wela’lin.”

“Tell her that I will cherish this basket. It will remind me of home.” He lifted the basket gently and inhaled its sweetness.

The woman smiled and nodded. She opened the velvet bag and pulled out the silver instrument. She looked pleased. She inserted her thumb and forefinger into the handles.

“My mother cuts thin strips of sweetgrass for her weaving. These scissors will be very helpful when she prepares the dried grasses for basket weaving.”

The older woman pointed at the steamer trunk and said a few words in her native tongue.

“My mother says that you are going on a journey soon. A journey that brings you great excitement and great sadness.”

“Yes … I am going to school in Boston.” George spoke directly to the mother and then waited for Mabel to translate before he spoke again.

“Pardon me for being forward, but she insists that I tell you this. She says you worry too much about things.”

“This is true. I am leaving my loved ones behind.”

“Your friend will be saddened by your departure.”

And with that final wish for peace, the women walked down the driveway and turned onto the road in the direction of the shanties by the river. Away from the public eye, the little girls danced in the dappled sunlight, weaving in and out like the fine braids of sweetgrass. Clockwise they circled with quick, shifting steps around Madeline so that their forward progress was slowed to the measured movement of ticking gears. The ribbons of their laughter trailed behind them, floating back to George like whispers. How beautiful, he thought, to be free of expectation.

As he stood on the porch and watched the parade of retreating figures, the full weight of his own departure became as tangible as the basket in his hands. It was a fair exchange – his secret defiance against his mother’s indifference toward their sacred weaving, a ceremonial cutting of ties. Now, further down the road, the group – barely recognizable as human forms – drifted into the amber light. Their shapes blended with the curves of the distant land in an abstract configuration of pastel dots gliding imperceptibly into George’s memory. They hovered for a brief moment on the horizon. The tall girl looked over her shoulder at the disappearing farmhouse. George blinked once and they were gone.

A graduate of Queen’s Faculty of Education, Tracey has devoted thirty-three years to her teaching career in the areas of Literature and Fine Art. During her time as an educator in Kingston, Ontario, she has worked with students to create set designs for many drama productions and community events and continues to do so. She was awarded her school board’s Outstanding Service Award (2012) and Queen’s Teacher of the Year Award (2000) for her work as a mentor. Tracey won the Royal Reel Award at the Canadian International Film Festival in 2014 for the screenplay based on the manuscript for her novel, Immortal Air.