So many people came out to celebrate the launch of Ida Linehan Young’s new memoir, No Turning Back: Surviving the Linehan Family Tragedy, that the road leading up to North Harbour Community Centre nearly transformed into a parking lot last Sunday night. This intimate community on Newfoundland’s Avalon Peninsula is the setting of the book, which chronicles how a tragic house fire changed the Linehan family, and the community, forever. 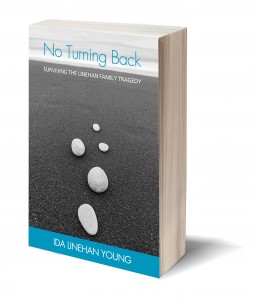 On June 19, 1980, Linehan Young lost five siblings in the fire, and suffered severe burns that almost took her life. After months of treatment and physical recovery, she was released from hospital to face the reality that her family had been ripped in half. In straightforward prose and an open-hearted manner, Linehan Young paints a series of vivid, haunting pictures as she recounts a remarkable story. In her book, she speaks often of the incredible support her community offered to her and her family as they struggled to find a “new normal.”

That support was more than evident at the book launch, with over 500 people traveling to this small community to attend the event. Record-breaking book sales of 852 copies left the author speechless and overwhelmed, as she signed books for more than four hours. Her friends and family provided food and music for the afternoon, hosting a true Newfoundland kitchen party.

Linehan Young is donating a portion of the book’s proceeds to the Atlantic Burn Camp in Cape Breton, NS, which played a huge part in her healing 27 years after the tragic fire. Donations totaling $900 were collected at the launch, which is enough to send two campers to Nova Scotia in 2015.

No Turning Back: Surviving the Linehan Family Tragedy is available in bookstores, online through Amazon and Indigo, and through the publisher’s website at www.creativebookpublishing.ca.