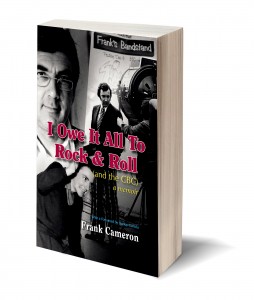 1964 was probably the best year of my life. CHNS and Hatfield Potato Chips sponsored a contest that allowed us to take twenty teens to Toronto to see the Beatles, even though I said the mop tops would never make it. Do I regret that? Damn right I do. The Beatles’ first Canadian release came out in October 1963. It was a mediocre song, “From Me To You.” Since they already had three number one hits in Britain I should have picked up on it. But I didn’t and neither did Capitol Records, U.S.A. They farmed out the Beatles to little labels such as VeeJay and Tollie Records, but when “I Want To Hold Your Hand” hit the North American airwaves in January 1964, they changed their tune. So did I.

When it was announced publicly that I was going to host a TV show on the CBC, some members of the board of directors at The Chronicle Herald weren’t too happy. I was told by CHNS management there was concern in the big-shot ranks about me making all that extra money. The problem seemed to be that if I worked on contract for the CBC, all the other announcers would want to do the same thing. My reply to the Board of Directors was (with respect) kiss my red rosy butt. If any of the other CHNS personalities were given the opportunity to do a TV show, you’re damn right they’d do it.

Anyway, here we were on an Air Canada Vanguard on Labour Day weekend, 1964, headed for Tranna. Once again Diane and I became chaperones. We were accompanied by Orv Pulsifer and his wonderful wife, Ruth. We took a side trip to Niagara Falls. For most of us, it was our first time at the Falls. Then it was back to Toronto where I attended a bizarre press conference with the Beatles at Maple Leaf Gardens. All four were in top form as they faced the questions from the press. Their answers were hilarious. Ashtrays were brought out for the group and a Toronto newspaper reporter noted that John Lennon smoked the whole time. She rose and said, “Mr. Lennon, you have been smoking through this entire press conference. Don’t you think you’re setting a bad example for our young people?” Before she could sit down, Ringo Starr reached under the table, brought out a bottle of booze, and said, “And he drinks, too!”

I say the conference was bizarre because the newspaper reporters wouldn’t let anyone but themselves ask questions. Back then they were press conferences. Today they would be news conferences. I don’t remember much about it because the questions from the newspaper reporters were too long and boring. It was difficult for TV reporters to get a word in, and the whole session lasted only a few minutes. I wish I had a transcript of that event, but I couldn’t lay my hands on one. All I remember is, the printed press in those days made a mockery of rock and roll performers and at this particular conference they had met their match. You ask dumb questions. You get smart answers. It’s as simple as that.

The eight p.m. concert at Maple Leaf Gardens was, like the press conference, bizarre. The warm-up acts included an American group called the Exciters. They did the original recording of “Do-Wah-Diddy” a year before South Africa’s Manfred Mann. One of the singers was eight months pregnant, but they were fun. Along came Gene Simmons (no, not that Gene Simmons), who did a song called “Haunted House.” Clarence Frogman Henry was also on the bill. The Bill Black combo performed, and a personal favourite of mine, Jackie DeShannon, who wrote much of her own material.

Then came the Beatles. The screams were blood-curdling. The only time the noise abated was when Paul McCartney spoke. You could hear a pin drop. I think it was his British accent that turned those female heads. He didn’t say much. But then, he didn’t have to. He could have recited bad poetry and no one would have cared. But rap music didn’t show up until the ’80s (cheap shot). After an hour of this madness the Beatles were gone. The lights came on and the St. John Ambulance moved in. A number of young girls sat bleeding profusely where they had ripped their arms to shreds. I had never been exposed to that kind of frenzy. It ceased to exist with the invention of the cellphone and other such devices that young people have embraced like the plague. Nowadays if you want a Beatles song you just go to YouTube.

Frank Cameron’s radio career began at CKEC when he was in high school. In 1959, he moved to Halifax and a career at CHNS. In 1967, he became a full-time staff announcer at CBC, hosting various radio and television programs. After retiring from CBC in 1995, he now volunteers at Seaside FM in Eastern Passage, Nova Scotia.