A rosy picture of the next stage in human evolution 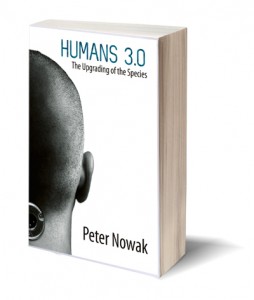 Humans 3.0 is a broad, well-written look at how technology is currently affecting individuals, societies and the human species, and how it may change our very natures within the coming decades. Nowak’s research is thorough. He interviews some key thinkers on the topic, as well as vampire author Anne Rice, and consults releases from financial firms, think tanks and international bodies like the United Nations and the World Bank.

Nowak points out that he is not a technophile and that he stumbled into his career as a technology reporter somewhat accidentally. He argues that technologies must be assessed carefully, taking into account their pros on cons. And he does just that, reviewing various costs and benefits of technological advances regarding our economy, health, art, sense of community, faith, identity and overall happiness.

Despite this attempted balance, he presents a jarringly rosy picture. Early in the book he argues: “Pretty soon, every man, woman, and child will have a powerful, networked computer…the advancement of this connective technology will eradicate third-world poverty…”

Nowak presents an array of statistics about global financial growth and says that, while disparity may grow within nations, technological innovation fuels increases in Gross Domestic Product (GDP) and ultimately reduces poverty. It’s not a provable claim and the chapters he focuses on this illuminate some fundamental flaws in the book.

Most importantly, there is a key theme that Nowak mostly ignores: environment. He refers to Malthus, who argued that human population growth would eventually outstrip the earth’s resources. Human ingenuity has instead resulted in ever more food production to mostly meet our needs.

Nowak argues that new biotechnologies will continue meeting the needs of our growing numbers until we hit peak population. The reality is the world hasn’t been short of food in some time – wealthy countries throw away nearly half the food we buy.

So Malthus, as used by Nowak, is a straw-man argument, put forth as if to dismiss the idea that humanity can suffer immensely from depleting the (global) environment we live in. Nowak briefly mentions that global warming is a challenge and that much rests on our response to it.

In this example and in other areas throughout the book, Nowak falls short by isolating technology as a singular driver of progress – ignoring, for example, the massive socio-political movements that coupled with technology have allowed better human health and literacy – and fails to note that technology cannot overcome the greed or psychosis or other fundamental flaws among some humans, or the hierarchy that tends to elevate them to positions of great power over the rest of us.

Technological advances may have helped revolutionary forces, but addressing the world’s power imbalances surely requires a political solution that can be sustained regardless of the devices we use. Nowak ignores or is oblivious to the fact that the most egalitarian societies in human history have tended to be the least technologically advanced ones.

Nowak does not explore the fundamental link between environmental destruction and the technology that gives us so much power to alter our environment and yet so little control of the outcome. One connector between these forces is the economic growth he assumes will feed the poor.

So far at least, growing global GDP (an oversimplified indicator of economic health that counts everything from dropping expensive bombs to building solar panels as a gain) has been directly linked to depleting the environment. Overlooking that conundrum leads Nowak to argue: “…as people master nature rather than coexisting with it or being subjugated by it, we are becoming Humans 3.0,” a more evolved technological race.

Perhaps that will happen if nature survives our subjugation. If it doesn’t, being part of nature ourselves we are frankly not in for a technology-based Utopia.

Despite its overly rosy outlook and lack of rooting in the science of finite resources or human political realities, Nowak does offer useful insights and information on the pros and cons of certain technological advances. He is frank in concluding that, while he personally has gained a great deal from new technologies in his lifetime, these advances come at a cost.

Our greater online connectivity, for example, may isolate us more than we realize. Conversely, despite there being valid criticisms of the forces of globalization – technology being the one focused on here – we live in the most peaceful, healthiest and perhaps even happiest time of recorded history. Ignoring the grave danger of environmental destruction, it would seem we are making progress.