How Our Decisions Define Us

Author Janice Landry on themes of remembrance, regret, and repercussions in her latest book

The unusual impetus for my new book, The Price We Pay, published by Pottersfield Press, was a shocking and private Facebook message.

It came without warning, popping up in my inbox and taking me completely off-guard. It came from a person I did not know. It came one evening in November 2013 after a television interview I had done promoting my previous work, The Sixty Second Story.

That book primarily paid homage to my late father and detailed–using multiple interviewee viewpoints, historical documents and archival research–a horrific house fire on Federal Avenue in Halifax. In October of 1978, my father, Captain Basil (Baz) Landry, of the former Halifax Fire Department, and an eight-week-old infant almost died in the blaze.

Captain Landry made a near physically-impossible rescue, after scaling a trellis, without a ladder, and climbing perpendicularly across and then hanging precariously from the home’s gutter system. Dad finally entered the baby’s pitch-black room, after somehow swinging his body up and into the broken window. He fell into the smoked-filled, second floor bedroom without wearing any breathing apparatus.

They both made it out, barely, with only about 60 seconds or less to spare, according to every attending Halifax firefighter I have interviewed; thus, the earlier book’s title.

Captain Landry received Canada’s prestigious Medal of Bravery for his heroism and selflessness.

The man who sent me the Facebook message has what is, by far, the most crucial point-of view (POV) of what happened before, during and after that fire; a POV that has not been told publicly before The Price We Pay. His frank admission, to me, helps solves the decades-old mystery of what happened before, during and after the fire, as only he would know–he is the person who caused it.

That man is Jamie McKenzie. In 1978, Jamie was an eight-year-old boy playing with matches. He absolutely never intended to hurt anyone or to cause massive damage to his family’s home. The fire was accidental, yet Jamie had carried deep guilt with him over many years; guilt stemming from his decision that day to play with matches.

He watched his plastic toys melt and drip, while in his bedroom, which was located just down the hall from where the baby was asleep in a crib. Jamie neve 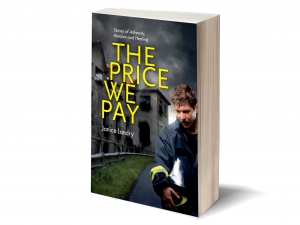 r knew the infant, Nick McKenzie, his nephew, was nearby, nor did he understand, then, the potential of what could have happened, and the ramifications of what did occur.

Jamie’s Facebook message, which you will read, in full, meant decision-making became one of the primary themes running throughout The Price We Pay. It appears in the 20-plus interviews I have done with outstanding Canadians who have all experienced and traversed some sort of trauma.

Binding them all together is also hopefulness, and their unwavering desire to help others by deciding to speak out publicly. By revisiting the darkest days of their lives, they aim to help people grappling with their own decisions or indecision.

All readers will identify with this lifelong struggle–to varying degrees.

Many people in The Price We Pay are first responders, including decorated Halifax Police Chief Jean-Michel Blais, who reveals publicly, for the first time, that he has been diagnosed with post-traumatic stress disorder (PTSD).

The diagnosis came after years working nationally and internationally as a first responder, primarily in his previous position with the RCMP, including multiple trips to earthquake devastated Haiti, where he helped retrieve the body of his own dear friend and peer, as well as countless other responders, aid workers, men, women and children.

The delicate and impactful revelations from both the chief and Jamie meant I had to tread carefully with the interviews and writing. In the case of McKenzie, who was the first person I interviewed for The Price We Pay, and whose frankness helped me mould the book’s focus and purpose, I struggled for months with several factors, as I prepared for our crucial face-to-face interview:

My multi-faceted rationale plays out as you read the gripping interviews with Jamie, Chief Blais and the others. Suffice to say, I have come to these conclusions, after this gripping and emotional two-year project: that our decisions truly do shape and define us and that the people in this book are some of the bravest men and woman I have met in my 28 years working as a journalist.

They are to be publicly commended for deciding to speak out, and, most importantly, they have all done so–no matter the price they have paid for their actions.