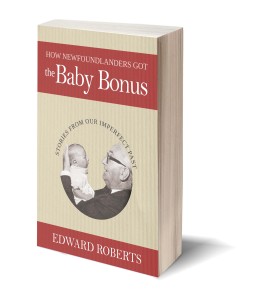 Author Edward Roberts has a knowledgeable, personable voice, and reading this book is like talking with some who possesses an incredibly broad curiosity for Newfoundland and Labrador history.

Indeed, as a politician, lawyer, and former lieutenant-governor, he often had a front seat at events, and was on a first name basis with many prominent figures.

The 50 chapters here come from a â€œPast Imperfectâ€ newspaper column he wrote for the Compass (one unpublished), and they are gathered into five sections including â€œOur Regimentâ€, â€œThe 1920s and 1930sâ€ and â€œMemorable Men and Timesâ€ (Edward VIII, anyone?).

Within this comes the origins of place names, various fractions and ructions within the House of Assembly, and the definitive answer to the question of whether the Newfoundland Regiment ever faced Adolph Hitler.

The style is conversational and the book is calibrated to suit both a casual and a keenly attuned interest in the subject.

How Newfoundlanders Got the Baby Bonus: Stories From Our Imperfect Past
by Edward Roberts
$19.95, paperback, 254 pp.
Flanker Press, October 2013