Holocaust Survivor and Author Receives Order of Newfoundland and Labrador 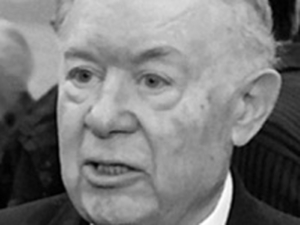 Flanker Press author Philip Riteman (Millions of Souls: The Philip Riteman Story) has been named to the Order of Newfoundland and Labrador! He and the other recipients will be honoured during a ceremony at Government House in St. John’s on December 14.

Philip Riteman has lived a long and varied life. He was born in a region of Poland that is now part of Belarus. In 1941 the Germans invaded his hometown and he, his family and thousands of other Jews were deported into Pruzhany ghetto.

The next year they were sent to Auschwitz where Philip’s parents, brothers and sisters died in the gas chambers. Philip, the only survivor, was used as slave labour until he was liberated by the American Seventh Army in 1945. After the war, and unsuccessful attempts to get into Canada or the United States, Riteman immigrated to Newfoundland where he had an aunt living. He made a life there for himself and eventually married and had two children.

One thing he didn’t do was talk about his experiences in the war.

Then, in 1989, having moved to Nova Scotia, he was inspired by Holocaust deniers to speak for those who could not, as he phrased it, speak for themselves – the dead victims of the Holocaust. He told his story for the first time at a school in Saint Stephen, New Brunswick and the floodgates opened. After that, Riteman continued to tell his story in schools, universities, churches, legions and businesses throughout Canada and the United States.

“He was the kind of speaker who never had a problem with speaking to very large crowds,” says Edna LeVine of the Atlantic Jewish Council in Halifax. “At his last event in Newfoundland it was held in a large hotel’s conference room that held thousands, and there were people in the lobby and on the street.

Riteman’s speaking engagements and commitment to spreading the word about the Holocaust to as many people as possible led to the book Millions of Souls: A Holocaust Memoir in 2010. The book is divided into three parts and talks about his life as a child and in the death camps, his life in Newfoundland and his subsequent work to disperse his message as far as possible.

Unfortunately, Riteman is not well enough to leave his home in Nova Scotia to attend the ceremony. “I cried many times,” he says. “I came to Newfoundland from Europe and I lived there 34 years. I’d love to go but I can hardly walk.”

His wife, Dorothy, concurs. “To him this would be the best place to be. He says he was a Newfoundlander before he was a Canadian.”

Riteman is grateful for the award. “I feel very happy and good,” he says. Yet, he notes that while the Order of Newfoundland and Labrador is an honour to receive, “it belongs to the veterans who went in harm’s way to bring an end to the Third Reich and liberate me from a brutal slavery and certain death.”