This season’s art books welcome long-time fans and new viewers alike to appreciate legendary Atlantic Canadian artists in three colourful and informative coffee-table editions. While each book below highlights a diverse artistic style, as a whole the collection offers insight, critique and backstory to the beautiful images held within their covers. 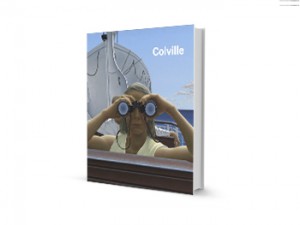 Rather than closing the door on Alex Colville who died in 2013, Colville (Goose Lane Editions), a stunning volume edited by Andrew Hunter to accompany the landmark exhibition he curated at the Art Gallery of Ontario, opens new dialogues. Perhaps not surprisingly, it’s not with the art world, once critical of Colville as he continued to work figuratively while it adopted abstraction, but rather with writers, including Nobel winner Alice Munro and Ann-Marie MacDonald and filmmakers. A scene from Wes Anderson’s 2012 film Moonrise Kingdom echoes the composition of To Prince Edward Island (1965) just as a scene in Sarah Polley’s Stories We Tell (2012) echoes Couple on Beach (1957), while reproductions of four Colville paintings appear in Stanley Kubrick’s The Shining (1980).

The book, containing 104 full-colour, full-page reproductions and endpapers featuring his Centennial coins, asserts Colville’s national status, although he can’t be categorized as a Canadian artist any more than as a small-town Maritime artist. Hunter argues the artist created ‘Colville’ a place as real as Sackville, NB, or Wolfville, NS, where the artist lived. This subliminal space transcends both towns and coastlines, opening a global dialogue about the human condition, exploring the tension between stillness and motion, intimacy and unease, strength and fragility, order and chaos, as relevant today as it was in the 20th century.

Hunter pairs the work thematically rather than chronologically, for example, Traveller (1992) with Horse and Train (1954). The perspective of Traveller is from the driver’s seat of a car. A man attempts to cross the road, partly obscured from view; the collision feels inevitable. That same tension is present in Horse and Train. Vancouver-based artist, Gu Xiong, reflects in a video from the AGO show that for him, and many Chinese students of the era, the painting represented freedom. That the image feels like a chilling precursor to the 1989 Tiananmen Square images, and proves artistic meaning transcends both time and locale. 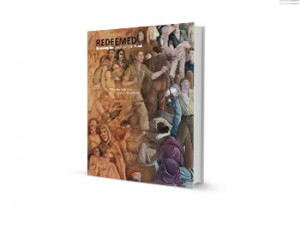 Find more art books: From the Beaverbrook Art Gallery to an overflowing personal library, gifted artist, writer, teacher and curator Terry Graff is surrounded by art at work and at home

Likewise, the work of Saint John artist Fred Ross still speaks to us about political and social issues and through the reanimation of his mural featured in Redeemed: Restoring the Lost Fred Ross Mural (Goose Lane Editions), about hope, perseverance and the spirit of community. In 1948, The Destruction of War & Rebuilding the World Through Education, which was commissioned in memory of 63 graduates who sacrificed their lives in the Second World War, was unveiled with great fanfare at Fredericton High School in 1948. Within a decade it disappeared. As Ross garnered national acclaim, the story of his lost, first major work assumed mythic status.
What happened to the two five by three metre panels, where the full-scale original drawings were discovered and how a team of studio artists, guided by Ross, used them to reanimate this cultural treasure over 60 years later is a story that’s truly inspirational.

The book, edited by William Forrestal, illuminates Ross’ early work using thoughtful essays by Charles Hill, John Leroux, Tom Smart, and Virgil Hammock. An 18-page photographic essay includes time-lapse photography by James Wilson documenting the reanimation of this pivotal work, which was influenced by the social conscience movement of American and Mexican muralists. Ross was confined to a wheelchair when he signed the mural in 2011 at its unveiling at the University of New Brunswick’s Currie Centre. He was presented a copy of Redemption before he died in August 2014 and apparently liked so much that he ordered copies for his friends. As Leroux writes in his essay: “It is a poetic instance of a lifetime’s work coming full circle.” 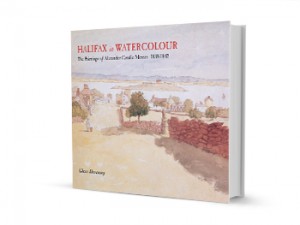 An amateur genealogist, Devanney stumbled upon the paintings while searching for images of his ancestral homestead, which he found in Fort Needham Road Looking Toward Halifax, painted in 1842. It depicts a country lane and through leafy trees, a gabled roof, recognizable as the Robert H. Devanney residence (later Devanney Grocery & Liquor), located where Gottingen and Almon Streets now intersect.

Through Mercer’s eyes Devanney was able to visualize the landscape where his ancestors walked and that emotional connection led to a compilation of 50 of Mercer’s 80 paintings paired with archival maps and photographs, historic quotes and insightful text, opening a portal into the city’s storied past.

Top photo: The restoration of Fred Ross’s The Destruction of War & Rebuilding the World Through Education is chronicled in a new book from Goose Lane Editions. Photo credit: Margaret Patricia Eaton