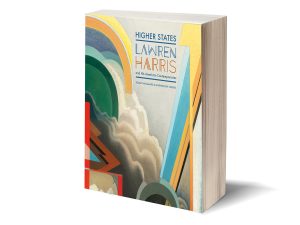 Lawren Harris, founder of the Group of Seven, is probably a household name in Canada, famous for his paintings of the Canadian shield and the high arctic. One of his paintings, Mountain Forms, holds the sales record for a Canadian painting: $11.21 million. His works have appeared on stamps, on book covers and on posters and cards familiar to most Canadians.

However, Harris, who lived from 1885 to 1970, is known for the works of his early life–paintings made before the mid-1930s and which represent the first 20 years of his career. It’s not that he stopped painting–for the next 40 years he followed his work to what he considered its only possible conclusion: abstraction. And, in his estimation, his mature art was his most successful. But like so many artists, he has been defined by his first “hits.”

Known to art experts, his abstraction is an undiscovered country to most Canadians. That is beginning to change, and Higher States: Lawren Harris and His American Contemporaries by Roald Nasgaard and Gwendolyn Owens (a book accompanying the exhibition of the same name at the McMichael Canadian Art Collection), is a large step in that direction.

Harris’ career in the US, his role as the founder of the abstractionist Transcendental Painting Group and his interactions and influences with that group in Santa Fe, New Mexico, is engagingly detailed in Nasgaard’s essay. Owens’ explains Harris’ spiritual interests and how they dovetailed with various streams in American philosophical thought. Both essayists describe Harris’ internationalism and paint a compelling picture of the American art scene in the 1930s.

This is an important book, meticulously researched and beautifully illustrated, one that adds much needed depth to the rather one-dimensional picture that has been, for the most part, the story of Lawren Harris to date.