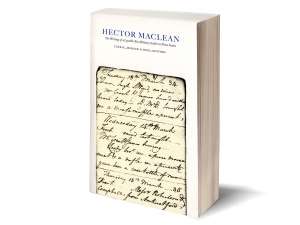 If you need a reminder about the quality of the publications produced by Gaspereau Press, simply pick up a copy of Hector MacLean: The Writings of a Loyalist-Era Military Settler in Nova Scotia. Every detail, from the heavy vellum dust jacket, illustrated with a reproduction of a page from MacLean’s journal, the “fine hand,” set down with a fountain pen, to the attractive blue-and-cream cartography done by the press’s publisher, Andrew Steeves, along with the inclusion of other historical maps and photographs, to the classic fonts used throughout the book, which make the type almost appear to be cursive writing – all these make for a beauty of a book.

Hector MacLean (1751 – 1812) lived a literate life designed for posterity. A Lieutenant in the 2nd Battalion of the 84th Regiment during the War of the American Revolution, who later settled in the newly-created county of Hants, Nova Scotia, MacLean chronicled his active and then quieter day-to-day life in a wealth of detailed letters and journals. This abundance of historical sources proved irresistible to editors Jo Currie, Keith Mercer and John G. Reid, who together, thoroughly annotated the texts to provide context to one early settler’s life.

Hector MacLean is written primarily for a specialized audience, “readers and scholars interested in the military history of the Revolutionary War and the environmental, cultural, and social histories of postwar settlement in Nova Scotia.” But anyone can enjoy the care and integrity that went into the creation of this book.