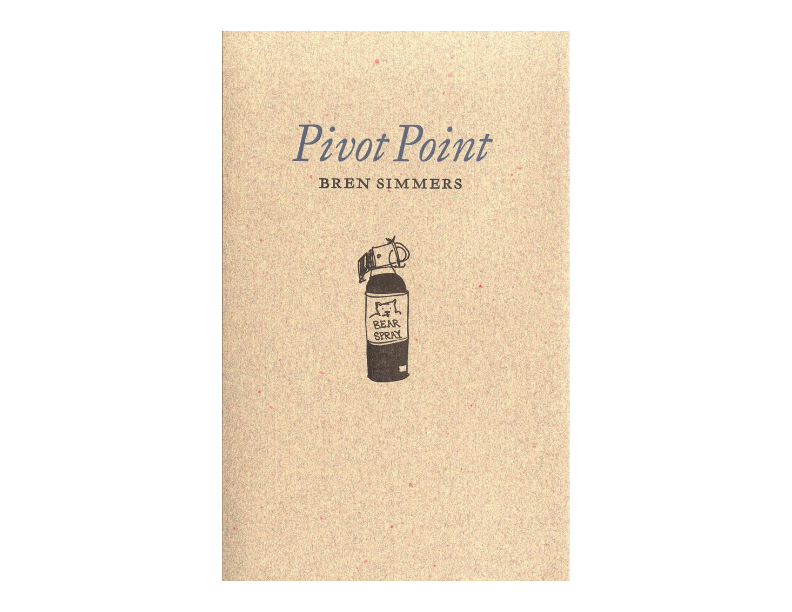 Bren Simmers’ Pivot Point is a beautiful publication. The softly textured book jacket, the evocative line drawings by Emma FitzGerald, and the high-quality cream paper with plenty of free space all show that Gaspereau Press lavished attention on this book.

Even the font choices warrant a two-page explanation by the publisher. Before one reads a word, the book is already a work of art.

Pivot Point is a poetic travelogue, following three long-time friends and their partners as they paddle and portage the canoe circuit around Bowman Lakes in British Columbia. The author takes us on a day-by-day journey, and each day’s reflection ends with a poem. She describes not only the physical aspects of the trip but also her emotional and interpersonal experiences.

Simmers’ poetical background is reflected in her concise and evocative language. There is so much portrayed in passages such as:

“two well worn stones, my head fits in the hollow of Adam’s arm. Held in that river eddy before the great packing and unpacking and repacking that is breakfast.”

Partway through the trip, she is challenged by a fellow traveller (not one of her group) to defend the role of poetry in the world today. She freezes and cannot think of a response at the time, but later formulates her reason for writing this poetic book, “to capture the spirit of this place, so that others can know it.”

She succeeds in her quest over and over again, with descriptions such as:

“Enter the blue hour, where twilight cycles through its cyanometer and trees dim to inky silhouettes.”

I have witnessed many such a Canadian evening but have never heard it described so well.

As with most poetic writing, the sparseness of words means there are unelaborated references that, if understood, make the book infinitely richer. In Pivot Point, there were a fair number of canoeing terms that I looked up to make sure I was envisioning the right thing: sweepers and standing waves, prys and draws, thwarts and yokes. Enter the handy “Glossary of Canoe Terminology” on paddling.com.

I also had to brush up on an isosceles triangle (two equal sides) and check out a number of people I didn’t know (the American writer Barry Lopez and the Canadian musicians Ember Swift and Lindell Montgomery are now on my radar.) Simmers under, rather than over-explains, and challenges us to use our intelligence and imagination.

Right from the start, Simmers pushes herself, physically and mentally. Both journeys are fascinating.

Not being a canoeist myself, I probably romanticise the idea of a camping canoe trip, but Simmers quickly dispelled my fantasy with her descriptions of the physical travails of this kind of “holiday.” The portages are arduous: Simmers describes potholes, squelching mud, broken pack straps, imbalanced carts and canoes that bruise hips and roll into ditches. The paddling also takes its toll, with sore muscles, blisters, hands frozen when the “steady showers scour sideways.”

But even more challenging, I think, are the emotional challenges Simmers undergoes. She describes a tough moment near the beginning of the journey:

“We snap, then fall silent. My mind flash-floods with negative self-talk, tears come before I can trace the thought trail back to not strong enough, holding everyone back, shouldn’t have come.”

Later on, she challenges herself to rise above her negative thoughts:

“These people are not the ‘campsite competition.’ When will I learn to see allies first, not enemies? Source from abundance, believe that there is enough to go around, ditch the scarcity narrative that no longer serves me.”

Halifax-based artist Emma FitzGerald provides whimsical illustrations that make you wonder if she weren’t along for the trip. The details are all there, be it the bear-spray cover illustration or the flies in the powdered-lemonade-and-whisky cocktails. The larger landscape illustrations beautifully mirror the verbal descriptions and add another level of understanding and enjoyment to the book.

Pivot Point is a pleasure to look at, hold, read, ponder and revisit.

Heather Carruthers, a classical musician by training, wrote a weekly food column for the Brandon Sun, in Brandon, Manitoba, from 2003 until 2010.