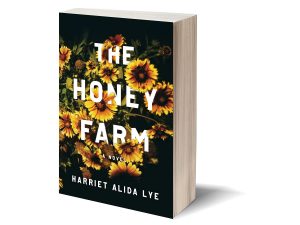 With reports of mass die-offs and hive collapse world-wide, the plight of honey bees—the almost invisible workers that pollinate three quarters of crops and are vital for global food production—is dire and, exasperatingly, not completely understood. Plummeting numbers have been linked increasingly to the widespread use of pesticides.

We have a love/hate relationship with the bee. It ensures our grocery shelves are full and provides us with the ambrosia of sweeteners. Yet that small, flying insect, with its venomous sting, is also (along with wasps and hornets) the number one animal killer of people. As a metaphor to explore good and evil, where belief and innocence are on the battleground, the world of the bee is a fitting backdrop.

Harriet Alida Lye is betting on that with her debut thriller, The Honey Farm, in which her two main characters wrestle with love, purpose and faith in a seemingly Edenic setting where ominous events unfold to test their psychological mettle.

The novel’s half-page prologue, a sensual, auditory travelogue through the insect world, sets the tone of the novel with its rasping, disturbing undercurrent:

Listen. It starts with the bees.

All day long the low, throttling hum of movement, the moment of liftoff— the bass note that never goes away. Then, swelling from the sidelines as day falls, comes the digital tick of tobacco-brown crickets—percussion–chkchking like an    automated sprinkler, chrpchrping like needy birds…………

It starts with the bees, and it’ll end this way too.

In the conventional plot, we are first introduced to Cynthia, the owner of a small, remotely located and drought-threatened honey farm, who devises a plan to attract artists in exchange for desperately needed free labour by placing an advertisement:

A free retreat for artists, writers, thinkers! Can’t work in the City?

Come to the Artists’ Colony for a month or two (or longer!)

and also learn how to keep bees! Starting beginning May.

Among the many responses are those from two 20-somethings: Sylvia, a would-be poet, but who is otherwise goalless, fresh from college with a strict Catholic upbringing; and Ibrahim, a second-generation Canadian who wanders Toronto at night salvaging cardboard for painting canvasses.

A cast of other young people who answer the ad round out the Agatha Christie-like party of farm hands. Soon, the heavier-than-expected work schedule conflicts with expectations of time for artistic creation. A plague of mysterious events (red-tainted well water; frog invasion; lice infestation; ailing livestock) see the young people, one by one, leave the farm.

But not Sylvia and Ibrahim. The couple draw closer together as the farm proprietor in turn sweetens the deal for them to stay, though her unrevealed motive begins to create an unsettling atmosphere.

The Honey Farm succeeds in creating a setting ripe for mystery and menace. The paragraphs detailing the workings of bees—how queens are replaced, how swarms are gathered and subdued—are nicely rendered.

The short chapters with their frequent and rote diary-like beginnings (“The next morning,” “Later that day,” “It’s a Monday”) sometimes distract from rather than produce the desired page-turning pace of a thriller. And the often naive dialogue rarely advances the plot and, with the exception of a few traits (one of the farm workers regularly drops f-bombs in her conversations) fails to bring much depth to the characters.

The liberal peppering of the novel with Sylvia’s doubts and questions about life, love and identity:

Now that she’s not a virgin, has anything changed?

Is she the same person? Do people every really change? Does it matter?

Who put this tree here? Why? Why is it even on this earth? How has it made its    way here and survived long enough to get this far? What does that mean—does its           time on earth account for something? Who does it belong to?

suggest it might be written for a YA audience, though the age of its protagonists suggest otherwise.

For a quick read this summer, where the sinister and sweet mingle, The Honey Farm will likely deliver, without a sting.

Alison Dyer's poetry collection I’d Write the Sea Like a Parlour Game is a finalist for the JM Abraham Poetry Award.