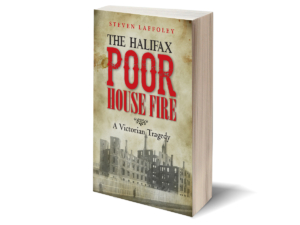 Set around the fire and resultant deaths of 30 “inmates” of the Halifax Poor House Fire in 1882, this book is a history of the times and a critique of the social supports available to the most destitute.

Laffoley, author of six books on Halifax history, writes in an engaging conversational style, walking the readers through the story, and the Halifax of the 1880’s and today. This is not a comfortable read, nor is it meant to be. As Laffoley pursues the truth as to the cause (and potential for blame) of the fire, he relies on newspapers of the time and the court transcript of the inquest into the fire. The reader will be jarred by the vocabulary of the day. Residents of the Poor House were referred to as “inmates” and included “paupers and the lunatics, the petty thieves, and the drunks… the halfwits.”

By skillfully weaving the stories of the dead through the impersonal transcripts of the inquest, Laffoley shows us the real persons behind these labels. The residents of the poor house were in large part chronically ill people who had been transferred to the Poor House after extended stays in hospital. They were widows who were left penniless, women who had been unable to survive, let alone support their children through prostitution and begging, people suffering from consumption (TB), the crippled, the mentally ill and the alcoholics, members of the so-called “dangerous classes.”

Underfunded and neglected, the Halifax Poor House relied on its residents to provide the roles of nurse, storekeeper, fire tender and boiler watchman. When government funding was not forthcoming [the city was $16,494 in arrears with payments – equivalent to $364,000 in 2015], the Commissioners and Superintendent decreased the meagre pay of the resident/staff rather than demanding the funds.

While ostensibly providing the residents an opportunity to better themselves, the institutional rules prevented that from happening. Residents had their clothing taken from them on admission so that they could be disinfected. They were often damaged in the process, yet the residents were not allowed to go on the street in their poor house clothing, for they would be charged with theft of public property. Families were separated: husbands from wives, parents from children (except for the very young), and were permitted contact only one day a week, for one hour. This hour was supervised by Poor House staff to ensure that no impropriety took place.

Laffoley states that one of his aims was to give “voice to those rendered voiceless.” He does that for the 30 residents aged 20 to 88, who died. He shows through evidence at the inquiry that the building was designed not for the safety of the 358 inhabitants and certainly not with any forethought for extricating the bedridden during a fire but “to make the Poor House the highest building in the city.” He demonstrates admirably the appalling lack of building codes and the curious and disastrous choice of the Superintendent, a man who had no qualifications for the job and saw no need to seek advice from the woman who had served as matron for more than 15 years.

He also gives us heroes, noticeably James Maguire and the other firemen who responded to the call.

It is an interesting read, the material as relevant today as it was then. The book would have benefitted from an index and maps of Halifax, then and now. That would add to its value as a reference book.

Johanna Bertin is a freelance writer who makes her home in Smithfield, New Brunswick. She is the author of two non-fiction books focusing on unusual events in Canadian history, a narrative history of Sable Island, a children’s biography of Sir Charles Tupper, an anthology of unusual Christmas Stories, and most recently a biography of Don Messer.