Reflections on a young life lived with the Royal Newfoundland Regiment 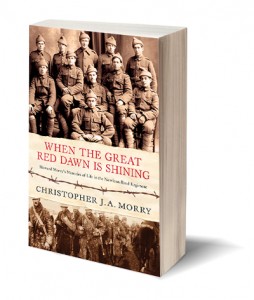 Christopher Morry’s book about his grandfather’s adventures during the First World War will be of interest not only to those wanting to know more about the Royal Newfoundland Regiment (RNR) but to anyone curious about the tumultuous period of the Great War.

Christopher Morry provides the narrative arc for the book, as well as an introduction that sets the book in the context of other studies of the RNR. However, it is Howard Morry’s recollections of the war as he lived it that rest at the book’s core. Those recollections are not diary entries. They are part of a memoir he composed decades after the end of the war. So it is not the immediacy of events one reads, but a reflection on that period in his young life which had such a lasting importance to him. Christopher Morry includes many photos to help readers picture people and places.

The book opens with reflections on growing up in Newfoundland before 1914, and how Morry and others answered the recruiters’ call. Next came the time spent in the UK, though the memoir’s focus is not on training but on Morry’s off-hour and AWOL courting of his future wife in Edinburgh. Then the RNR moved to sweltering, eye-opening Egypt, and from there to combat in the Dardanelles and at Gallipoli. The conditions were worse than awful, and Morry brings it to life: “It wasn’t the fighting we minded, ’twas the heat and flies and lice.”

This is not a book about strategy and tactics, nor a campaign analysis. It’s about life as lived in tents and trenches; with illnesses and wounds; pranks, drinking and the sad look on men’s faces when there was no letter from home. The most famous battle the RNR was involved in was in France at Beaumont-Hamel. Morry was there and survived, and his memoir is poignant about what he experienced on that fateful day.

Christopher Morry ends the book by summarizing the rest of his grandfather’s story, after the war (and after Howard Morry’s memoir) ended. When the Great Red Dawn is Shining is a welcome contribution to wartime literature written by an ordinary enlisted man.

A J B Johnston is a historian and novelist with sixteen books in print. France made him a chevalier of its Ordre des palmes académiques for his body of work on Louisbourg. For more on him, go to ajbjohnston.com; instagram.com/ajbjohnston; or Facebook at A J B Johnston, Writer.