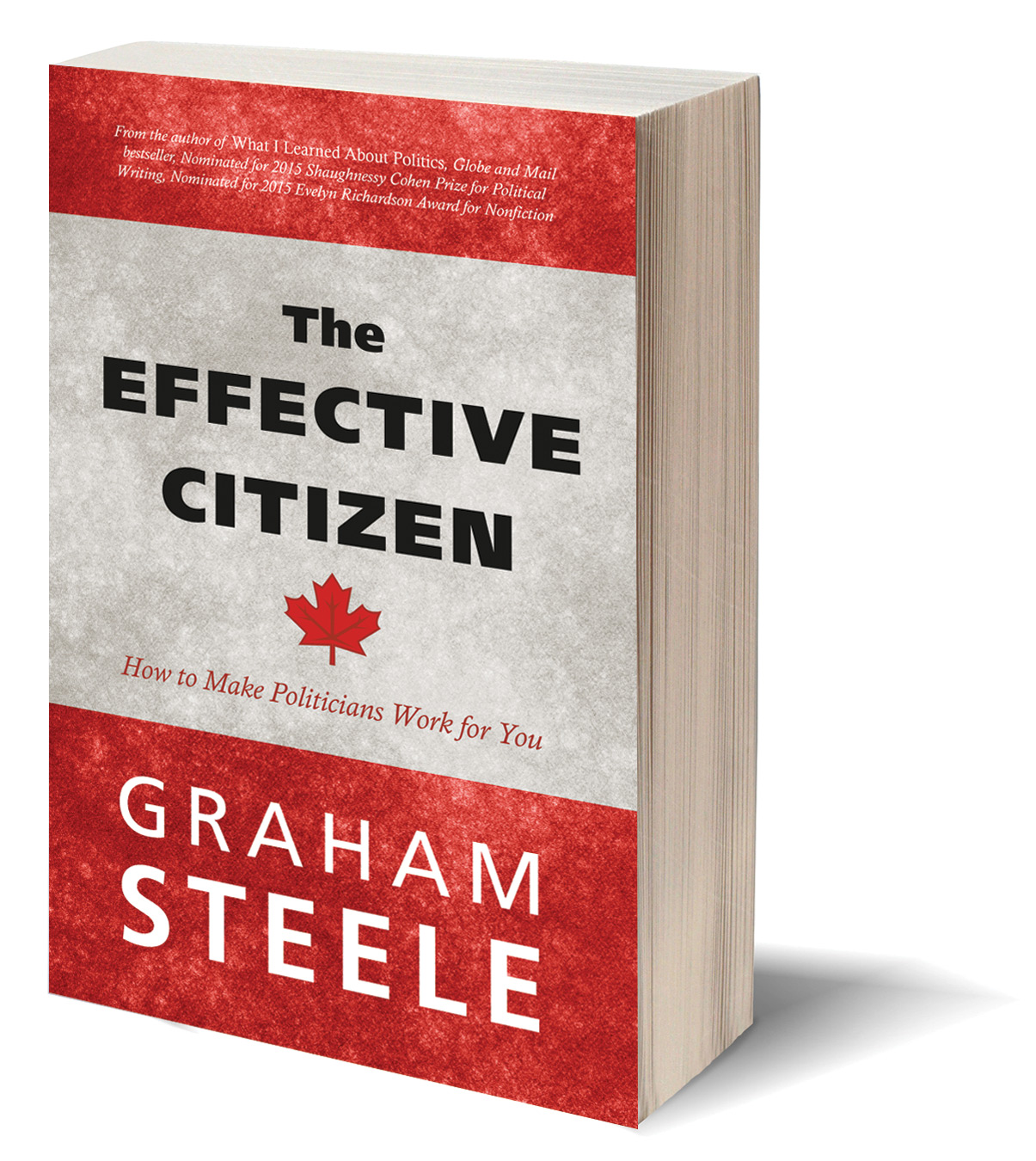 About halfway through The Effective Citizen, Graham Steele casually mentions that in some ways, politics is a lot like the mafia. If so, Steele is like the mafia capo turned police informant; he’s spilling the dirt on his former career to help you beat the politicians at their own game.

Steele delves into the psychology that drives politicians—what motivates them, what bugs them and why the system transforms good people into political hacks. Armed with experience from a 15-year political career—first as a staffer, then an opposition New Democrat MLA and ultimately as Nova Scotia Finance Minister for a three-year stint, Steele should know what he’s talking about.

The Effective Citizen begins with a short parable about the executive director of a small Nova Scotia non-profit trying to get help from the government. After months of runaround and upbeat platitudes from the local MLA, Steele’s imaginary executive director gets nowhere.

“You thought you did everything right, but nothing changed. What went wrong?” Steele writes. “You were a victim of political bullshit. I wrote this book so you might better understand how to recognize political bullshit, and what to do about it.”

The rest of The Effective Citizen is split up into two halves: first, a frank examination of the way politics actually works and second, a user’s guide for how to navigate the system and make government work for you. It’s a quick, engaging read, and the writing is approachable.

The first half, especially, is fascinating and relevant for just about anybody who’s interested in politics—even if you’re not an executive director of a small Nova Scotia nonprofit.

“Why is self-awareness so rare among politicians?” Steele asks, as he examines the theatre, the empty, partisan jockeying and bad-faith strategy that drives so much in politics. “It’s psychological self-defence. It would mean spouting bullshit while being fully self-aware that you are spouting bullshit, and being okay with that. Most people can’t do that.

“But what politicians are doing is forever weaving and re-weaving a story about themselves. It’s a story about what they’re accomplishing and why. To be an effective citizen, you need to understand the politician’s story, and then figure out how to knit yourself within it.”

(In an early footnote, Steele offers a solid academic defence of the word “bullshit” and then uses the word liberally throughout.)

At times, the examination of political psychology is almost sympathetic to the politicians; in other moments, it’s utterly devastating, peppered with anecdotes from Steele’s own political career. In its best bits, the book is a refreshingly clear-eyed, unsentimental examination of the worst aspects of political thinking, from somebody who really knows what he’s talking about.

If there’s one way The Effective Citizen falls short, it’s Steele’s own self-awareness. After a while, the political anecdotes start to feel too self-serving. There’s no mea culpa, no moment where Steele describes how he became the monster that he’s describing in so many other politicians. And in fact, there are a few times where the author specifically makes a point of saying that he always eschewed the ugliest tricks of the trade.

The second half of the book is more narrowly useful to that hypothetical small non-profit executive director. The vast majority of citizens will never have to use the kinds of tactics that Steele describes, because most people don’t devote their time to changing legislation or securing government funding for their projects. Steele’s guidance might make it easier but, as he repeatedly emphasizes, there are no secret tricks, no shortcuts to navigating the political world and no guarantees that you’ll be successful.

The Effective Citizen is a worthwhile read for anybody who cares about politics and wants to understand how it really works. As Steele explains, the political playing field is tilted heavily in favour of the politicians. All too often when they win you lose. Steele uses his experience to help shift the balance a little bit back in favour of the citizens and calls on the reader to demand more from their governments.

“Don’t give your politicians a free pass,” he says. “Their desire to please shouldn’t clash with your desire to get things done. Results count. Words are cheap and are the building blocks of political bullshit.”

James McLeod is a political reporter with The Telegram in St. John's, NL and the author of Turmoil, as Usual: Politics in Newfoundland and Labrador.