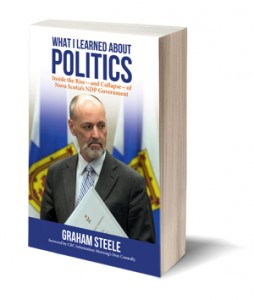 Former Nova Scotia Finance Minister Graham Steele is among the nominees for the Writers’ Trust of Canada’s Shaughnessy Cohen Prize for Political Writing. His book, What I Learned About Politics: Inside the Rise—and Collapse—of Nova Scotia’s NDP Government (Nimbus Publishing) has been a top seller since its release last September.

The prize, which is named for another former politician, Windsor, Ont. MP Shaughnessy Cohen, awards $25,000 to the winner and $2,500 to the finalist. The winner and finalist will be announced on March 11 at Politics and the Pen in Ottawa. The finalists were selected by a jury comprising author Denise Chong, author and Ottawa Citizen columnist Terry Glavin, and The Globe and Mail Atlantic bureau chief Jane Taber.

The annual prize is awarded for a literary non-fiction book that “captures a political subject of relevance to Canadian readers and has the potential to shape or influence thinking on Canadian political life. The winning work combines compelling new insights with depth of research and is of significant literary merit. The prize particularly values books which provide the general reader with an informed, unique perspective on the practice of Canadian politics, its players, or its principles,” says the Writers’ Trust on it’s website.

Check back on March 11 for an update to this story.