Ghost of the Southern Cross 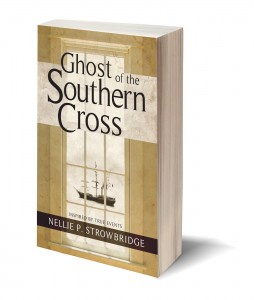 There was no way to warn Captain Clarke that a storm was on its way. Families cringed in fear that the Southern Cross would plough into the heart of the gale. A full day passed without a report that the vessel had been sighted.

Maggie hurried down the road to where a crowd had assembled outside the post office located in the back of Porter House. Their feet made restless scuffing as they waited for their weekly mail. Maggie scanned the posting on the outside of the door giving the arrival time for all the sealing vessels. There was no news.

Abe Petten, beside her, said, “Old Hattie’s inside making clickin’ sounds on a gadget that’ll bring all the news. When she’s finished she’ll post it on the door. I hope it’s not all bad.”

A man behind banged him on the back. “Away with yer and feel your head. That captain and his ship knows each other full well. There’s worry for naught.”

The post office door was finally opened and then the wicket. Maggie pushed close. Men and women gripping their children’s hands stood outside waiting. The calm weather had not eased the storm brewing in their hearts, dread suspended above their heads like a sword. William scuffed along the path to the site of a dozen men gathered around. People pushed to get close as the postmistress read a cable: “At 7:00 p.m., Sunday March 29, a wireless message from Channel–Port aux Basques, on the southwest corner of Newfoundland, informed St. John’s that on Saturday, the twenty-eighth, about 6:30 p.m., the Southern Cross was spotted passing about seven miles out. She was down in the head with all flags flying, a signal that the barque was going home with a bumper crop estimated between 17,000-25,000 pelts.”

William’s mind settled at the news that the Southern Cross was finally on her way home. Families cheered the captain on with their prayers knowing he was racing to be the first in St. John’s harbour, a distinction every captain dreamed of claiming. She had her load of pelts and flippers and she should be in port Tuesday evening or Wednesday morning.

The strain of waiting eased.

“She’s coming,” one man said running down the road and throwing his cap into the air. Off to one side a father stood silent. He was waiting for news of his son who was on the SS Newfoundland.

All along the Avalon, Butlers, Battens, Busseys, Pettens, Taylors, Stanleys, Bishops, Kennedys, and Porters waited, spirits lifted now that the Southern Cross was on her way home.

“There’ll be some fiddlin’ and whistlin’ now,” someone said.

Families’ hearts grew light and expectant. Floors were scrubbed and pots shined and filled with stews and soups from food garnered from their sparse cellars. The men went about sawing and laying in wood with renewed energy. Having been anchored with fear for what seemed like a lifetime, families now waited with welcoming hearts. Still, their minds weren’t far from the men on their way home; there were uneasy glances at the sky and furrowed brows for signs of a weather moon.

The storm erupted on the last day of March, swells swallowing each other over and over, while the sea opened its mouth with sprays of white spit. People standing outside their homes and looking out to sea felt the sting of snow pellets against their skin. Then heavy, wet snow pelted down. The spring snow had a name.

“Sheilagh’s brush,” a farmer said as he settled his horse in his stable.

They laughed, forgetting for a moment the vessel on her way home.

Caroline sat inside her house, her lips pressed in a grim line. Room windows were darkened with snow. The shades already drawn. She shocked herself with the thought.

A day later, the first day of April, the storm had worsened. Maggie pulled on her grey woollen coat to go see if William had any news.

“Stay put, me maid,” Liddie urged. “There’s a living screecher out there this mornin’.”

When she saw Maggie determined to go she shrugged. “If that’s what it takes to settle your mind, go, though it won’t be an easy tramp.”

Grateful for her aunt’s understanding, she drew a blue knitted cap over her head and tucked her long light hair into her neck under a thick, varicoloured scarf. She pulled on a pair of double-knitted blue cuffs. Her aunt wrapped hot biscuits in cloth and tucked them in her pocket.

She thanked her and hurried out the door and down the road through driving snow. The wild wind swung like an iced rope in the hands of a madman. A ribbon of silver skin from a birch tree sailed through the air and hit her face. Barbed ice crystals shot up her nose sharp enough to bring tears.

After a long struggle she reached William’s house, her stiff fingers clumsy in lifting the latch on the porch door. The door swung at her like a beast pushing her backwards. She lost her balance and fell while the wind banged the door against its hinges. She dragged herself to her feet, grabbed the latch, and pulled the door back. She got inside and stood shivering in the porch. It was no day for anyone to be out, no day for a ship to be on the ocean.

William seemed to have shrunk inside his shabby clothes. Maggie looked at him sitting by the stove, his face drawn and heavy, his mouth down. Pouches, red and sore-looking, had formed under his eyes. He drew in a heavy breath. “Jamie is unchancy, that he is, to be out in this weather.”

Maggie said nothing as she shed her ice-encased coat, cap, scarf, and cuffs by the stove. Then she took a chair and sat by the fire listening to the screech of wind around the house, its sharp whistling against the windows. The silence between her and William became so heavy that she jumped up. “I’ll make you a fine cup of tea,” she said. She reached into her coat pocket and pulled out her biscuits. She laid them on the table and set the kettle to boil.

When the tea was ready William lumbered to his seat and lifted his cup in shaky white hands. He took a sip and put it down. Then he dipped his biscuits and ate them. He didn’t speak. His mind was crowded reliving stories of men caught on the ice and frozen as solid as statues, others surviving by wrapping themselves in sealskins and lighting fires with blubber. He thought of the many sealers that had disappeared in icy waters never to be heard of again. He hoped that the Southern Cross had left waters too rough for the wooden ship to handle and had found shelter in one of the bays along the coast.

Maggie gathered her belongings where they hung beside the stove, dressed in them half-dried, and went out the door wanting to be away from William sitting silently, brooding.

There was no gentleness anywhere. Wind shrieked and trees swayed in its grip while snow smoked the air. Maggie trudged along like a blind woman feeling her way home, wind and snow like steel needling her skin. She was relieved to get to the house and hurry inside.

Liddie looked up from knitting a sock, worry creasing her brow. She said nothing as her niece hung up her wet clothes beside the fire and went up to her room. The warmth of the wood stove rose to fill the small space with coziness.

Maggie pulled back heavy quilts and slid into bed hauling the quilts back over her shoulders. The stove heat had not reached under her sheets and she shivered until her body heat warmed her. She drifted into sleep and woke with a jerk. She lifted herself on an elbow and stared through the small window. Wind and sleet smacked the thin pane, beat against the house in twists and turns. Her heart lurched. Jamie was out on a vast ocean in contrary weather. “Be safe, Jamie,” she whispered. She remembered Jamie’s mother saying, “Worry is a thief not to be let in.”

That was easier said than done. She could not lock a door or shutter a window against it.