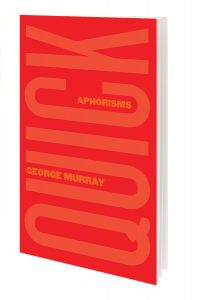 George Murray has made a poetic career out of astute observations. His second collection of aphorisms, Quick, lands somewhere between philosophy and intellectual humour, gospel and a good bathroom read.

Being an aphorist is a rare pursuit in the days of experimental poetry. Aphorisms are curt, almost terse statements, and Murray is like a master Tweeter. The first time we met was several years ago, over coffee at the since defunct Hava Java in St. John’s, when his first book of aphorisms, Glimpse, now a bestseller, hit the proverbial shelves. In returning to his aphoristic endeavours and latest collection, I can’t help but see the aphorism as almost an oracle: “Events without consequence are called acts; events with consequence are called memories.”

While he ruminates with pithy statements like “Myths are built out of ears by mouths,” and “Everything is a lie, but everything points to the truth,” Murray’s Quick can be read in one sitting. This very quickness of the collection, part Chinese fortune cookie, part wisdom pocket, should not be mistaken for lack of depth. Murray’s work honours long-lived resolve. It is preferable to bite off small morsels of this book, savour each aphorism like something sacred, delicious.

While the enlightenment exudes, my favourite moments of Quick are when Murray blends humour with poetics. The thing is, poetry can be very funny. Like any universal truth, or hard-hitting observation, there’s an element of frankness, a certain clear-lined honesty required of humour. Lines like, “Time knows how to heal all wounds because time inflicted them,” “There is a personal style to how the soul wears its body; even more so for how the body wears its soul” and “When seeking mystics it’s always best to avoid those advertising their services.”

Given his background as editor of BookNinja, an online poetry website, his current role as poet laureate of the city of St. John’s and his extensive bibliography since 2000, including Diversion, Whiteout, the affore-mentioned Glimpse: Selected Aphorisms, The Rush To Here, A Set of Deadly Negotiations, The Hunter, The Cottage Builder’s Letter and Carousel: A Book of Second Thoughts, Murray still holds a few secrets. In the pursuit of truth, which is far more mercurial than noble, he writes, “The secret no one wants to know isn’t a secret.”

Murray’s always been a bit of an academic renegade as his devotion is to the page. Quips like “Language is a dead language” and “Observations and discoveries are separated only by Ph.D.s” will either infuriate or enthral scholars. Or inspire envy.

While he offers relationship advice (“Only in finance, art, and first marriages does the advent of good enough reveal the lack of better” and “Love is a reduction of the number of lives separating two people”), by far the most apt for a particular ex-relationship dynamic is: “The trick to loving a narcissist is to always have a mirror on your shoulder.”

There’s something familiar, almost a knowing in reading a good aphorism. Part of Murray’s exploration was taking accessible poems like “Howl” and “In a Station of the Metro” and toying with them. Murray reminds us of his duty, “Poets are humanity’s autocorrect” and “The heart is a canary in the mind’s coalmine.”

Despite living in Newfoundland for over a decade, the Atlantic Ocean and dialect of the East Coast rarely find its way into his work. He’s not interested in writing about place, necessarily, yet it seems to creep in. Murray writes, “In graveyards by the sea, the inscriptions on tombstones must be carved extra deep” and “Wilderness beings at the outer edge of routine.”

Whatever mood or stage of life you find yourself, there’s an aphorism to shift or affirm your focus. It’s not necessary to read a full poem or go on and on. As Murray notes, “Every moment of your life is all your life.”