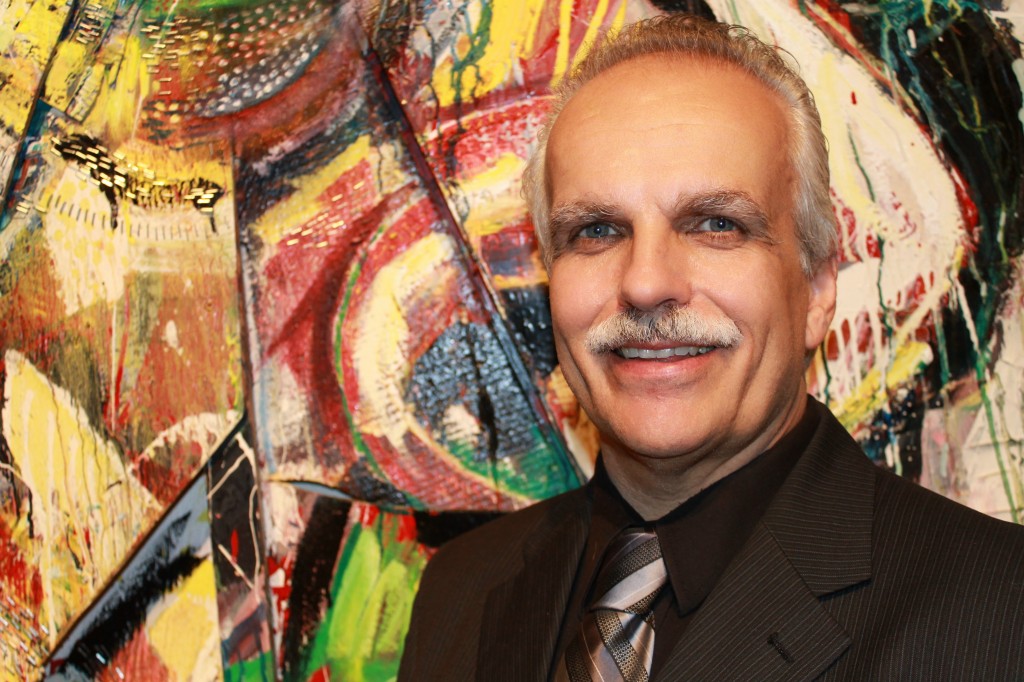 From the Beaverbrook Art Gallery to an overflowing personal library, gifted artist, writer, teacher and curator Terry Graff is surrounded by art at work and at home

Terry Graff’s studio is without boundaries. It encompasses the galleries, archives, vaults and his office in the Beaverbrook Art Gallery as well as a personal library of art books which fill his study and have extended into the dining room in the home he shares with his wife, Kim Leaver-Graff.

Five years ago when Graff was director of the Mendel Art Gallery in Saskatoon he was recruited by Bernard Riordon, then Beaverbrook’s director, to accept the position of curator in a planned succession that would see him take on the roles of director/CEO and chief curator upon Riordon’s retirement. “My wife and I had been away from the Maritimes for a long time,” he says, speaking fondly of the 14 years they and their family spent here. They lived in Sackville, New Brunswick when he taught at Riverview High School and Mount Allison University and directed Struts Gallery. Then in Charlottetown when he served as director of the Confederation Centre Art Gallery and Museum before moving to St. Catherine’s as director of the Rodman Hall Arts Centre.

“The invitation to come to the Beaverbrook was one I just couldn’t pass up,” he says, “because the permanent collection here is by far the most outstanding collection of masterworks of any gallery where I’d worked and the opportunity to work with a collection of this caliber was really important to me. This gallery was a major gift to New Brunswick by Lord Beaverbrook [Sir Max Aiken] and it needs to be cared for, interpreted and promoted.”

Upon arrival Graff began work on Masterworks from the Beaverbrook Art Gallery, a magnificent 238-page, large format volume, featuring full-colour plates of 75 works from the gallery, published by Goose Lane Editions and launched in February. The artists’ list reads like a who’s who with works by Salvador Dalí, J. M. W. Turner, Lucien Freud, Tom Thomson, Emily Carr, Henri Matisse and David Milne selected from over 3,500 works in the gallery. Each painting is accompanied by a lively and insightful analysis of the life and times of the artist as it applies to the particular work. There are also six longer essays by leading art historians, for example Dalí scholar Elliott H. King has written about the gallery’s signature painting, ‘Santiago El Grande’, while Katherine Eustace who trained at the Victoria and Albert Museum has explored Walter Sickert’s portraits of power.

Graff’s essay, “A Portrait of Lord Beaverbrook and His Incomparable Gift” explores the works from yet another perspective, that of the collector. “I have an even greater appreciation for the collection now and feel even more strongly that certain works can’t be pulled out of the collection without damaging the integrity of its meaning, because collections have a personality or story and you can read them holistically,” he says. “There’s communication between the works of art when you look at how Beaverbrook acquired them and what he was thinking, so there are a lot of sociological and historical significances to the collection, as well as to the individual works.”

“The project actually extends back 10 years with Bernard Riordon who’d wanted to do this but it just never got off the ground, because of the dispute [between Beaverbrook’s heirs and the gallery over ownership of 135 paintings]. So as soon as I started in 2008, I began researching the collection, really delving into it. Then in 2009, the gallery turned 50, so I used that year to create a template for the Masterworks exhibition, but I certainly hadn’t done all the research by that time and it wasn’t something I could be totally absorbed in every day, all day long. That would have been a luxury,” Graff says, explaining how he works around the clock on multiple projects and has written “a slew of other publications related to group and solo shows at the gallery. So over four years, a little bit at a time, I looked through archival records, researched and checked out the paintings.”

“I spent a lot of time studying and contemplating each painting and I’d let the work speak to me and I’d jot things down that I wondered about. Did the artist really intend this? Is this the hand of another artist? Sometimes you discover all kinds of crazy things—in fact our Constable painting has another painting underneath it, which we discovered through x-ray and then discovered Constable had painted over the sitter when he complained about being portrayed in a turbulent storm. So I find there’s a real difference between looking at an actual work of art as opposed to looking at it on a computer screen, as the two experiences are radically different. For me looking at art is a bodily experience—you need to be present with your senses.”

Graff actually wrote most of the book at his home, however, as he says the gallery is not conducive to the more introverted aspects of the job. “Working in a gallery is a bit like Christmas as there’s always excitement when a new work comes in. And it’s definitely not a tomb,” he adds, referring to the contemporary exhibitions he’s curated, including 2012’s Hot Pop Soup’s opening where guests were invited to dress for an Andy Warhol-style party. “I don’t make a big distinction between historical and contemporary, because to me it’s all inter-related, but to truly appreciate contemporary art I think you have to be grounded in historical art.”

This leads the conversation back to Graff’s personal library where he did most of the research for Masterworks using the hundreds of books he’s been collecting all his life. “They’re irreplaceable because there’s so much you can’t access electronically—rare books and catalogues, that will probably never be digitalized and besides, I’m always cautious about what I find online, so I prefer reliable books by international scholars.”

Graff now has even more reason to be cautious about computers, as last summer when the Masterpieces manuscript was almost completed, his computer crashed. “I hadn’t backed it up and I lost a big chunk of text and that was devastating. There was a sunken feeling in my stomach—all that work! So I phoned Susanne Alexander [publisher] at Goose Lane and asked her to extend the deadline, but of course she’s looking at it from the other end, with editing, proofing, printing, binding. But she did allow me a little more time. It meant a lot of late nights, until two or three or even four a.m., drinking coffee and plowing through, but what I found was that because I’d already done it, the second version came out better in the end—at least that’s my perception.”

And indeed he’s right. His engaging and informative presentation of the interconnections among the Beaverbrook’s art treasures has made it a book you can come back to and enjoy, again and again.

This story was originally published in the spring 2013 issue of Atlantic Books Today.