Full Speed Ahead is Full of Questions, Adventure 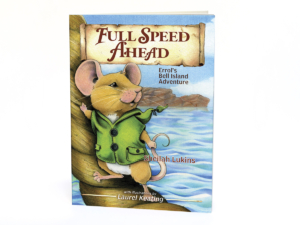 In Full Speed Ahead: Errol’s Bell Island Adventure, author Sheilah Lukins teams up with illustrator Laurel Keating to tell the story of Errol, a small mouse living in Portugal Cove with his family.

Errol’s the kind of young mouse who dreams big. While other mice spend their days sleeping and their nights close to home and family, Errol spends his nights chatting with his friend Old Rat about their ancestors and their long ago journey across the ocean to Newfoundland.

Errol’s family doesn’t approve of his friendship with Old Rat because, as Errol’s father says, “You never know what a rat is going to do and you can’t believe anything a rat tells you.” But Old Rat’s stories are too exciting to miss and before long Errol decides to go off on a big adventure of his own.

He hitches a ride in a car and sets off to Bell Island. But when the car pulls onto the ferry, Errol discovers he may have gotten in over his head. He has a close call with the ship’s cat but he still manages to reach his destination after jumping into a rental car with some tourists.

Once he starts travelling with the tourists, Errol’s mouse-eye view is perfectly positioned to offer a unique perspective of Bell Island to young readers. Through his eyes, author Sheilah Lukins provides readers with a virtual tour of the Bell Island Mine Museum and shares bits of trivia by weaving them flawlessly into her narrative.

Of course, after a turbulent trip back, Errol eventually arrives back home where his worried family is waiting. Except now, there’s someone new in their midst. While Errol is gone, his family and Old Rat find a common ground and realize they aren’t so different after all.

This is a charming early chapter book with beautiful full-page illustrations that do a great job of breaking up the text and enhancing the story. It brushes over a range of serious topics, like immigration, mining history, geology and acceptance, without settling for too long on any of it — because more than anything, Lukins places her emphasis on telling an exciting tale.

Full Speed Ahead: Errol’s Bell Island Adventure is the perfect choice for any little adventurer who’s ever wanted to know more about where they come from.