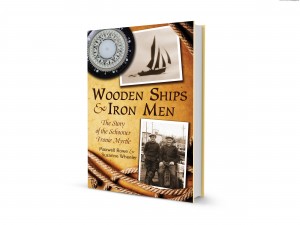 The story of the family-built schooner Fronie Myrtle represents poignant legacies—of the family who sailed the seas of Newfoundland and Labrador between 1934 and 1949, and of the father-daughter team that penned the tale.

Wheeler tells in the preface how, during visits to her ailing father, Max, in Chance Cove, NL, she encouraged him to write down his remembrances of the schooner. The resulting notes, together with the daughter’s writing and research, and the 1945 dairy of Uncle Eli William Rowe, capture the social history and adventure of those who fished all along the east coast of the province.

While you’ll need strong glasses to read some of the reprinted documents, and some proofreading errors have crept into the first print—forgotten caps and misplaced apostrophes are notable niggles—the book, with lines from Eli’s diary like “The wind is blowing from the west and civil” is a fresh and authentic love song to a way of life now gone.

Paul Butler is the author of nine novels including NaGeira and Titanic Ashes. His website, paulbutlernovelist.wordpress.com, will runs the Instant Hook Literary Award each fall.