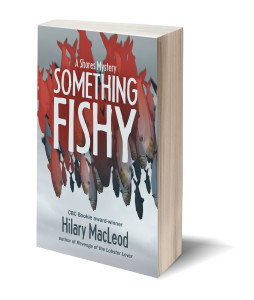 Herrings are falling from the sky over The Shores. It seems to be one of those unexplained phenomena that have occurred in places around the world. But it turns out itâ€™s just a publicity stunt by a newcomer whoâ€™s opening a restaurant on the shore that specializes in â€œdangerous diningâ€â€”eating food that can kill you.

Actually, it was raining fish.

Gus Mack was preparing a â€œlunchâ€ before bed while talking to her husband Abel. She stuck her head through the pantry door when he didnâ€™t reply. He wasnâ€™t in the kitchen, the room they lived in, with the couch, the two rocker recliners, and the stove. There was an empty teacup where Abel had been seated.

Gus picked it up and continued her pursuit.

â€œYou ainâ€™t gone out, are you?â€ she called in the direction of the back door. â€œNot in this.â€

Where could he have gone in this weather? Red Island lawns were getting a much-needed soaking. There had been no rain all spring. The dry weather had turned the grass brittle, crusty. The red clay was pink and cracked.

She shuffled over to the back porch, empty cup in hand. She opened the door with her elbow.

A herring plopped into her cup. She jumped back, dropping the cup. It smashed on the concrete stoop. The herring slid free, and flipped like a Slinky down the three concrete steps. Plop, plop, plop â€“ a streak of slime on each step. The slippery fish skin glistened under the glow of the outside light.

Her eyes now accustomed to the dark, Gus squinted into the night. A hard rain and a herring. More than one, falling from the sky. Gus was not a Catholic, but she crossed herself.

Hy McAllister was cycling to visit her friend Ian Simmons when the rain and the fish began to fall. She skidded to a stop. A herring smacked her head. It slid off, but another perched on her shoulder. A few more fish landed in the basket that hung from her handlebars.

â€œSupper?â€ Ian squinted down at the basket when Hy arrived at his doorway. He was holding the door open, entranced by the phenomenon. Heâ€™d read about such things, but to have it happen here at The Shores, a village that the world had forgotten, had him mesmerized.

Hy burst through the door and his reverie.

â€œGross,â€ she sputtered, as she shook a herring out of the hood of her raincoat.

It flopped on the floor. Ian reached down and picked it up.

â€œInteresting.â€ He turned it over.

â€œYou can say that again.â€ Hy pulled off her raincoat. Ian looked puzzled. He thought he had.

Ianâ€™s parrot Jasmine, who was allowed to fly free, caught the scent of herring in the air â€“ and saw the fish in Ianâ€™s hand. Sheâ€™d learned to act like a gull, not just sound like one. Squawking, she swooped down on Ian and plucked the herring from his hands, then spat it out on the carpet.

Mountie Jane Jamieson was looking out the window of the asymmetrical police house up the road from Ianâ€™s. Sheâ€™d always thought The Shores and its people were odd. She would never have believed them if theyâ€™d told her fish had fallen from the sky. Sheâ€™d have thought it was some peculiar rural code forâ€¦well, something else. But here they were, fish falling from the sky. It was really happening.

Ian would be able to explain it. Jamieson grabbed a raincoat, darted out the door, dodged the fish, and dove into the RCMP vehicle.

She lived only a few hundred feet from Ianâ€™s, and would have walked, except for the fish. She fired up the vehicle. A herring thumped onto the hood of the car and another splattered onto the roof as she drove the short distance to Ianâ€™s. She could feel the fish squishing under her tires.

Hy and Ian were examining a herring when she arrived.

Hy gestured with the fish, pointing outside.

â€œRed herrings? What does that mean?â€ Jamieson was a city girl, stuck in this outpost. A city girl who couldnâ€™t tell the difference between a herring and a mackerel, an eel and a snake. It wasnâ€™t a part of her upbringing, nor her RCMP training.

â€œBefore falling from the sky,â€ Ian added slowly, trying to figure it out.

Neither did Hy. Ian thought he knew. That wasnâ€™t much. He fell back on what heâ€™d Googled.

â€œNo one knows what causes these things. High winds, a hurricane, tornado, a waterspout. The elements scoop the fish out of the sea and dump them somewhere else. It rained eels in Sunderland in the early 1900s, ducks in Maryland about fifty years ago, and fish different places, different times, past and present. This is not unusual. Well, it is, butâ€¦â€ He shook his head, puzzling over what had happened. Cooked fish. Not like anywhere else. But when was The Shores ever ordinary?

â€œUsually.â€ Hy watched as Ian caressed his thinning hair and knit his eyebrows together. He was perplexed.

She grinned, a triumphant look â€“ the look she always gave him when science failed him. In this case, she knew as much as, or more than, he did. Hy owned a company, Content, and wrote and edited for a variety of websites. She was a source of a plethora of small pieces of useless information.

â€œScience doesnâ€™t have a clear answer. I wrote a series for the Department of Fisheries and Oceans website on this â€“ and I chose all the ones where there is no clear cause.â€

â€œIn Louisiana about sixty years ago, a marine biologist and his wife saw sunfish, minnows, and black bass come down from the sky during a gentle shower. No big wind â€“ and they were in at least 130 kilometres from the Gulf of Mexico.â€

â€œDistance doesnâ€™t matter.â€ Ian was not to be outdone. â€œWhat about the thousands of tiny African frogs that landed up live in Athens about thirty years ago?â€

â€œIâ€™d put that in with my inexplicables. Like the peaches.â€

â€œPeaches?â€ Jamieson and the parrot Jasmine chorused. Jasmine kept on saying it. The word was part of her repertoire that sheâ€™d forgotten. Now it would be dusted off for weeks.

â€œYeah, peaches. A bunch of them, hard, green, fell on workmen at a building site in Shreveport. There was a black cloud overhead, but otherwise clear sky â€“ no wind, no rain, nothing to explain how the peaches got there.â€

â€œI suppose this means weâ€™ll be dealing with the media â€“ and more tourists on top of the ones we already have.â€ Jamiesonâ€™s control of the village was tenuous at best. Just last year, sheâ€™d been placed there as a permanent police presence along with her partner Murdo because a number of murders and deaths had occurred in The Shores in the previous couple of years. More had happened since sheâ€™d come. Too many. Too many for a place as small and isolated as The Shores.

Hilary MacLeod is a writer and former journalist and broadcaster who divides her time between a cabin in the woods near Ameliasburgh, Ontario, and a house in Sea View, Prince Edward Island -- a house that was once inhabited by the hired hand on L. M. Montgomery’s Uncle George Campbell’s farm. She is a professor of Media Studies at Loyalist College, and spends her free time plotting what her next murder will be.