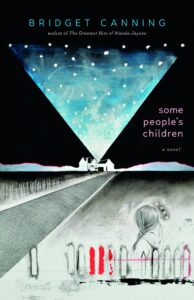 Maggie wakes on the bed. The bedspread is itchy on her bare skin. Smells like cigarettes. She is alone. It is not her bed.

She remembers standing outside the bathroom. Tony’s voice was a hiss: “I thought you said you were seventeen.” She tried to speak around the lump in her throat: “Please.”

Someone walked by and laughed, sharp and small like a bee sting. Tony pulled her into the bedroom.

“But we care about each other.” She kissed his neck. That’s one of the things he likes. He shook her off. He slammed the bedroom door as he left.

She was crying on the bed when the voices started. The party banged on around the edges of the door, but these were new sounds. Mostly barked commands:

And then Tony was back. He shut the bedroom door to a rising cheer. She remembers reaching for him. They’d never been inside before—twice in the woods on a blanket, twice in the backseat. She remembers wishing hard for no one to come in. Please let the door be locked.

And now he’s gone. She has to go home. She sits up.

Cecil Jesso stands by the bed. Her jeans and pullover are bunched in his hands. His pale eyes are bulging like marshmallows. His pants are undone to reveal a triangle of white cotton. Matted hair. She buckles into a ball.

She pulls the bedspread up from under her, to cover herself. Cecil clutches her things to his chest with one hand. He reaches out with the other and grabs the bedspread from her hand. “Lemme see,” he whispers. His bottom lip trembles.

“No!” Maggie swipes at his hand. Her naked breast brushes his forearm. She scrambles to the foot of the bed. It is hard to move away and keep herself covered. She hears Cec’s breath suck in, wet and beastly. He moves closer. No no no no. Everything is no. Everything is help. Her guts fold in on themselves. They remember something sweet and sickly from earlier and don’t want it anymore.

Now Cec is gasping mouthfuls of garbled fury. He drops her clothes and puts his hands to his wet face. Maggie wipes her mouth, panting. The smell of her own bile hits her and she’s sick again, this time off the side of the bed. Cec backs out of the room. “Jesus fucking Christ.”

Her hands move without thought, top on, legs in jeans, underwear and bra shoved in pockets. She stands. Her body sways. Get out, get out. The hallway outside the room reeks of cigarettes and rum. Everyone is gone. She half skates down the hallway, through the kitchen. She snatches her shoes from the porch. Cecil stands in the doorway to the living room, rubbing his face with a towel. “You’re a little savage,” he says.

“You’re a piece of shit. You ever touch me again, you’re dead.”

“I never touched you, Maggie Tubbs,” he says. His voice is sooky and slurry.

A half-empty Labatt 50 bottle sits in the porch, like someone left it when they were tying their shoes. Maggie grabs it around its stubby neck and flings it at him. He steps back, missing the splash of beer. It hits the floor and rolls away.

Bridget Canning was raised on a sheep farm in Highlands, Newfoundland and currently lives in St. John’s. Her debut novel, The Greatest Hits of Wanda Jaynes, was published with Breakwater Books in April, 2017 and selected as a finalist for the BMO Winterset Award, the Margaret and John Savage First Book (Fiction) Award, the 2018 NL Book Award for Fiction, winner of the Bronze IPPY Award for Best Fiction, Canada East and nominated for the 2019 International DUBLIN Literary Award. She is the recipient of the 2018 CBC Emerging Artist Award with ArtsNL.