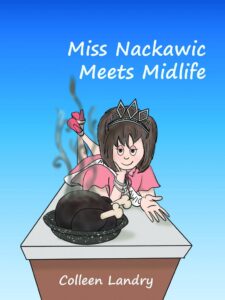 According to Page 2, Section A, Subsection 5F of my worn out copy of the Beauty Queen 101 Handbook, a piddly 1% of the population has (legally) worn a tiara and sash 24/7 for an entire year. Guess what, you guys? I’m among the blessed few to be in that 1% (My thoughts and prayers go out to those in the 99% who are searching for their life’s purpose—it must totally suck). Thirty-six years ago, I literally beat the odds…I became Miss Nackawic 1981. You heard me—I reigned over the town of Nackawic, NB, for 365 days. Let that sink in for a minute. A beauty queen wrote the book you are holding. For reals.

My path in life literally changed on that awesome September night in 1981. Before I became royalty, I wasn’t sure what I wanted to be when I grew up. It’s not that my future wasn’t bright—I mean, I was on a bowling team that finished in seventh place, and I was a solid C (ish) student—obviously I could have done anything with my life! Duh. It’s just that I wasn’t sure I wanted to be a professional bowler and yea…my marks were beyond outstanding, but what was the point of university?? Nah. I wanted some-thing more, and once I felt that cold, shiny tiara dig into my feathery bangs I knew what that something was—winning Miss World and total fame! Boom. The universe had spoken and I was listening. According to Page 2, Section A, Subsection 5F.2 of the Miss World handbook, only 0.000000001% of former beauty queens go on to become Miss World, but I intended to beat the odds again. I had the passion and the personality disorder to go all the way to the top, obviously. All I needed was the right pair of sandals and Miss World would be mine for the taking. It felt amazing, at the age of sixteen, to finally have a meaningful purpose!

Since chances are you’ve never been in, much less won a pageant, I’d like to give you a behind-the-scenes glimpse into what it’s really like. Close your eyes and imagine it’s September 3, 1981, the night of the Miss Nackawic pageant. The arena is packed to the rafters with plain, regular people, desperate to find out who their new ruler will be. The lights on the stage are blinding and hot, and I’m standing there in my homemade pink, sheer(ish) chiffon gown, wishing I’d worn underwear. Whatever. A bead of sweat trickles down my cheeks, giving me an awesome dewy glow. I silently congratulate myself on my talent portion—an air guitar routine. I know deep down I nailed it even though I was super dizzy from swinging my head so much. I pray that the last-minute cartwheel I almost landed during the evening gown catwalk pays off for me—I did it to show my spontaneity, which is the fifth most desirable trait in a beauty queen according to Page 15, Section B, Subsection 3C of the handbook. Boom.

Next comes the interview portion. My question is: Should more businesses be wheelchair accessible? I answer: Duh. There should definitely be more businesses in Nackawic because I have to drive all the way to Fredericton to shop for shoes and that’s totally unfair! Nailed it. The judges go off to make their decision. The wait feels like twelve million years. Finally, the Master of Ceremonies walks toward the microphone. I’m so nervous I literally almost black out. The pressure makes me wish I was in the audience with the plain people. I take a deep breath. The M.C. opens the judges’ envelope and lets out a funny sound like a dying animal would make. (Weirdo) He shakes his head, shrugs his shoulders, and then says literally the best words I’ve ever heard in my entire life: “Um. This is a joke right?? Well, if you saaayy so…Miss Nackawic 1981 is Colleen Roy.”

The flashes from the paparazzi cameras blind me. I’m literally attacked by the press as they bombard me with praise and questions. At one point, they even bow before me. That’s when things get real—I’d waited my entire life for proof that I was better than everyone, and, when the people bowed, I knew it was true! I was literally the Chosen One and in that instant I knew I was made for a life of waving at peasants, wearing pretty gowns and riding on parade floats.

Can I be honest? After that night, I fully expected my life to spin out of control, but everyone in my town was terrified I’d end up like one of those child-actors-turned-cokeheads, so they really respected my time and space. I was too young to understand it at the time, but, looking back, I’m actually relieved I didn’t explode to stardom and turn into a diva. Instead, it was more of a slow burn. I literally shudder to think of what those Hollywood overnight-success kids go through. Back to me now…

This book is my gift to you and the dreamer inside you. It’s the story of a small-town, sixteen-year-old girl with big hair and even bigger dreams—a girl who blossoms into a stunning, middle-aged(ish) woman who wants more out of life . It’s the story of one girl’s vision and her extreme perseverance when faced with over three decades’ worth of roadblocks. You too, can have what I have—a future filled with hope that your big dream is just around the next corner.

Put your seatbelt on and enjoy the ride . I hope this book makes you feel a whole lot of emotions. I think it will. I also hope you paid a minimum of $40 for it, because I have bills to pay.Wait. What?? Fourteen dollars and ninety-five measly cents is all you put down for this masterpiece?? Dear Publisher: You’re fired! Wow. Somebody owes me some friggin’ money.

Colleen Landry has authored articles for Canadian Living, The Globe and Mail and The Irish Times. Her humour blog, One Hot-Flashin’ Mama focuses on menopause and family life in the Maritimes. Her humour book, Miss Nackawic Meets Midlife, was released in 2018.