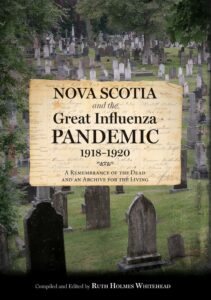 Below is an edited excerpt from the conclusion of Ruth Holmes Whitehead’s Nova Scotia and the Great Influenza Pandemic, 1918-1920, which details the severe impacts of the “Spanish” flu pandemic of the early 20th century, on individuals and communities. Here, the author looks specifically at strategies for containing the disease, the dangers of lifting quarantine (“re-opening” in today’s parlance) too early, and the difficulties of properly documenting and quantifying what was happening—challenges that are remarkably pertinent 100 years later in the face of the COVID-19 pandemic.

This section concludes with perfect advice for political leaders at times like these. In short, be very open, be very honest and be very proscriptive.

News of the spread of the epidemic in the United States was waking Nova Scotians to the fact that something unusual, massively contagious, lightning-fast, and lethal was happening in the outside world. In September, things in Massachusetts got so bad that they begged other states for help. They even sent word to Halifax, asking for assistance in the form of doctors and nurses. Lieutenant-Governor McCallum Grant wrote Governor McCall a letter saying that Nova Scotia remembered the help Boston sent them in the aftermath of the Halifax Explosion in 1917, that aid in the form of nurses had already been sent to Boston, and that other nurses and doctors would follow, “as you may require them.” A copy of this letter appeared in Halifax newspapers on September 30 and October 1. It included portions of a telegram by Massachusetts State Health Commissioner E.R. Kelley to Surgeon-General Blue of the US Public Health Service, underlining the state of emergency:

Doctors McDougall, Thomas and Lessel told the mayor of Halifax, “We advise that with the first appearance of the disease, the utmost limit of preventive measures should be used—such measures as would be used in dealing with any of the dangerous epidemic diseases—and used at once.”

The Necessity of Accurate Statistics in Fighting Epidemics

In 1918, Dr. J.T. MacAulay, city and district medical officer from Cape Breton County, spoke at the October 26 meeting of the Board of Health against lifting the quarantine in Sydney. He was particularly insistent that schools remain closed. The board, he said, lacked the data to be effective, and until they got it, strategies could not be created to contain it. He knew that without data, one cannot plan a campaign against an enemy—in this case, influenza.

I include Dr. MacAulay’s statement of frustration, because our book still has the same problem, namely, lack of data on this most virulent epidemic. Even today, we still have no idea how to arrive at a figure for casesof influenza in Nova Scotia during the disease’s 1918–20 run, because no continuous coverage of patients exists, and no totally accurate counts from that time are available. We can only guess that the number of those infected with the virus at any one time or place was overwhelmingly greater than the number of deaths, a huge percentage greater. And while this is better than a disease that kills everybody, it does mean that for weeks and months, Nova Scotia society must have had to do without the skills, labour, and contribution of those who were ill. Small towns, villages, and rural areas must have at times been so stricken, that business and social life were at a standstill. It’s almost a surprise that any data at all was being sent in. So you will find less on that than I could wish. This project still needs your help!

Dr. Marble’s lists have given this text a head start of at least twenty years of research.

The thing that I noticed all the way through this collection of oral histories, the thing that impressed me the most, was how people consistently helped family, neighbours, and total strangers. It is this quality of Nova Scotians, to rise to the occasion with compassion, I think, that contributed most to our low death levels here, as compared with many other places.

Philadelphia, Pennsylvania, for example, had 759 deaths in one day(October 10, 1918), whereas the city of Halifax, in the entire three years of the Great Influenza had only 336. Halifax County, including the city deaths—the county with the highest total—had only 497 deaths in three years. Comparisons are odious, and there are too many factors to draw conclusions from this, I know, but compared to many cities, countries, even continents, Nova Scotia got off lightly.

In Halifax, there were some strong individuals in local governance: the Provincial Health Officer, Dr. W. H. Hattie; the Mayor, Dr. Arthur C. Hawkins; the Chairman of the Board of Health and Quarantine Officer for the Port of Halifax, Dr. Norman E. McKay. These three doctors in key positions knew exactly what to do and had the power to enforce it. Since Halifax had the largest population, and the largest port traffic, this counted for a lot. The city fielded a cast of medical personnel, both civilian and military who worked themselves ragged, and who sometimes gave their lives taking care of the sick. Sydney had a good medical health officer in Dr. J. F. MacAulay, but he struggled with city aldermen who were better at arguing than at taking action. Rural communities, on the other hand, often made do with only one, or even no medical personnel at all. In a number of places, when influenza took out the local doctors, the people were petitioning for others to be sent—for help of any sort. Sometimes this was possible, sometimes they were left to cope alone.

The Great Influenza was a nightmare beyond our wildest imaginings, but Nova Scotia somehow survived. It survived because people helped each other—with common sense, with kindness, sometimes even by sheer bull-headed doggedness.

What the Future [Presently] Holds

The Centers for Disease Control in Atlanta, Georgia, states that it is not a question whetherthis sort of influenza epidemic will occur again, but when. “Influenza viruses are unpredictable—we can never be certain of when or from where the next pandemic will arise. However, another influenza pandemic is inevitable. Mar 11, 2019.”

John Barry’s opinion, as well as my own, is that the most important thing any government at any level can do in a situation like the Great Influenza epidemic is to tell people the absolute truth about what’s going on, what the dangers are, and what measures they will have to take. [Submitted to publisher January 2020]

Ruth Holmes Whithead is a renowned historian and ethnologist. She has worked with the Nova Scotia Museum for more than 40 years. She is the author of several books including Six Mi’kmaq Stories and The Old Man Told Us.