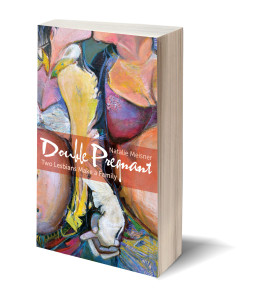 The boat is called the SS Infertility and Iâ€™m surprised to find it crowded with people from all walks of life. From first class to steerage, all of us trying to gain the peaceful harbour of family life. ViviÃ«n and I look at site after site where women, gay and straight, married and single, pour their hearts out on the topic of conception. It is frightening to realize just how many obstacles from the biological to the financial to the social there are to conceiving a child. On the other hand, our searches provide some comfort. You canâ€™t help but feel a sense of kinship to all those other women out there with a similar hunger in their bellies.

Some sites take a cheerful approach with names like diy Baby. This site focuses on practical advice for the first-time self-inseminator. Based in the U.K., diy Baby makes getting yourself or your wife pregnant with donor sperm seem as simple as throwing up a sheet of drywall in the basement or fixing a leaky faucet.

A site called Co-parent.net offers a whole spectrum of new and intriguing models for a family. There are single men and women looking to find someone with whom they can have and raise a child, but without a romantic relationship. There are gay couples and single gay men looking for either light involvement or full-on co-parenting arrangements with women. There are gay men looking for surrogates with an open adoption clause. Single women who want to parent alone. In short, there are individuals and couples of nearly every walk of life, gender and identity affiliation all looking for some version of the same thing: continuity. A family. A way to love, to pass something on, to pay it forward I suppose.

Still other sites, like FSDW (Free Sperm Donations Worldwide), act as a hub for potential donors and recipients to connect. There we find an astonishing number of men from all over the world offering their services as donors. Some men are willing to travel to you, if you pay their airfare and expenses. Others offer to ship their sperm via FedEx. Some men post pictures of themselves, even of children they have fathered. The pictures make me squirm. These children could hardly consent to having their pictures posted as a kind of unorthodox resume.

There are a couple of important abbreviations that anyone entering this brave new world needs to add to their vocabulary. AI and NI stand for artificial and natural insemination, respectively. Some men have a strict preference for one or the other. Not surprisingly, ViviÃ«n and I are all about the AI option.

After familiarizing ourselves with the new jargon and the protocol, we begin to talk about how we will write an ad of our own. Since I am the writer, the actual drafting falls to me. My first attempt at a tag line looks like this: Professional Lesbian Couple Seeking Donor.

We hold it at armâ€™s length and inspect.

â€œThat makes it seem like weâ€™re getting paid,â€ says ViviÃ«n.

â€œAh. I see the problem. Like we went pro. Hey, thatâ€™s not a bad idea. Maybe we could get some sponsorships. Hello, Nike? Converse? â€

We take a few more runs at it together. It is actually quite a difficult piece of text to compose. You want to cast a wide net â€¦ but not too wide. You want to sound approachable â€¦ but not desperate. You want to give some men a reason to write to you â€¦ but you donâ€™t want to come off like youâ€™re flogging a set of encyclopedia. After scratching our heads and drafting out loud we come up with the following:

Hi! We are a married couple (two women) looking for a sperm donor to help us start a family. We are not looking for a co-parent, but are open to the possibility of a donor being a part of the childâ€™s life.

A bit about us: we are a writer and an engineer hailing from Nova Scotia and Holland, respectively. We work on renovation projects in our spare time, play basketball and soccer and enjoy the outdoors. We are sociable, easy going and like to travel and have dinner parties. If you are interested please contact us to discuss further.

I am not sure, at this point, where we sit on the easy-going scale, but I have faith that we can be, again, once we manage to get ourselves pregnant. The site doesnâ€™t require it, but most people have chosen to, so we even post a photo of us crouching down on a pier with water and mountains in the background. Our intrepid pup (a blue heeler Aussie mix) sits there with us, perking up his ears for the picture.

â€œHey, look, we got our first message,â€ I call out to ViviÃ«n, who is stirring a pot of something fragrant in the kitchen. I catch wafts of cinnamon â€¦ cardamom. Maybe her trademark lamb stock/squash soup?

â€œAnd there are pictures. Lots of shirtless pictures.â€

â€œHe says he can drive down here immediately from Edmonton â€¦ at least heâ€™s close by â€¦ and get this: take as much time as needed to get as many women pregnant as we like.â€

â€œHow many women does he think we have over here?â€

ViviÃ«n comes running over, ladle in hand, leaving a trail of soup drops across the kitchen floor. â€œBut we said AI. We said artificial insemination. As needed? He did not say that!â€

â€œRead it yourself. Thereâ€™s no way I could make that up.â€ And there isnâ€™t. This is only the first in a series of events that take us into terra incognita and put us into situations far stranger than fiction.