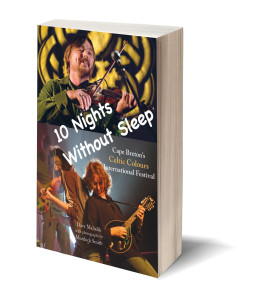 I had met Bumblebees fiddler Liz Doherty years earlier when sheÂ was in Cape Breton researching fiddle traditions. We were friends already so itÂ made sense that I would be their driver, and it wasnâ€™t long beforeÂ friendships were formed with the rest of the Bumblebeesâ€”harpistÂ Laoise Kelly, accordion player Colette Oâ€™Leary, and Mary ShannonÂ who played fiddle, mandolin and tenor banjo. Laoise and I madeÂ quick friendsâ€”she rolled her own smokes and I had usually smokedÂ all mine. She was always ready to â€œgo for a fag.â€ I guess my personalityÂ and my willingness to let the night go on until it was overÂ matched theirs. We all would be there after just about everyone else had turned in for the night or wandered off. Hanging out withÂ these four would set the standard for years. They were mad aboutÂ the music in a way Iâ€™d never seen before. Theyâ€™d play all night longÂ and be game to go at it again the next day, and the next day, andÂ the next day. This is what they did. They played music, and beingÂ in Cape Breton for Celtic Colours was like having their ownÂ playground.

I was finishing up some work at theÂ Whatâ€™s Goin OnÂ office whenÂ the phone rang. â€œDave, the Bumblebees want to go to GordieÂ Sampsonâ€™s party in Big Pond after their show in Ingonish. Can youÂ pick them up at the Holiday Inn in Sydney around midnight?â€Â Starting at midnight and heading to a party at my friendsâ€™Â house? Sounds like my kind of job. This is going to be fun. EvenÂ though I had eight hours or so until I was needed, I had been bittenÂ by the bug and knew I would get no more work done that day, soÂ I headed to the Holiday Inn just to see what was going on. TheÂ main lobby was alive with activityâ€”people coming and going withÂ armloads of instruments and luggage, luggage trolleys piled highÂ with the familiar shapes of guitar and fiddle cases, people checkingÂ into the front desk with odd accents, and lots of stretching limbsÂ after transatlantic flights and long drives from the Halifax International Airport, five hours away. Ready to get in on theÂ action, I made my way downstairs. Tables were set up to distributeÂ information to artists and volunteers. I said hello to my fellowÂ troops, many of whom I knew from past musical experiences orÂ who had volunteered during the East Coast Music Awards whenÂ they were held in Sydney in 1995. So I hung around for a while,Â soaking up the atmosphere, going out for a smoke to catch up with people, and making myself useful where I could before heading offÂ home for a meal and a nap in anticipation of what I was sure wouldÂ be a long night ahead.

That first mission to the house in Big Pond that Gordie SampsonÂ shared with friends and fellow musicians Matt Foulds and CarloÂ Spinazzolaâ€”for the party after a show called â€œWinstonâ€™s ClassicÂ Cutsâ€ at the Big Pond Fire Hallâ€”brought Celtic Colours to lifeÂ for me. It may not have been my kind of music, but it was my kindÂ of party.

The house was jammed to the rafters as music and dancing tookÂ over the clock. I couldnâ€™t imagine how Laoise Kellyâ€™s harp wasÂ going to perform at a kitchen party, but she parked it right next toÂ the table and dug into the tunes with Gordie and Stuart CameronÂ on guitar, Liz on the fiddle, Colette Oâ€™Leary playing accordionÂ and Matt Foulds on hand percussion. For the next couple of hours,Â you could barely move through the kitchen, but the music dancedÂ through the old farmhouse.

At one point I was upstairs in line for the bathroom, and itÂ sounded like someone was pounding away on an old piano. IÂ mentioned to the next person in line that it sounded like SheumasÂ MacNeil was really drivinâ€™ â€™er now. When my line-mate asked whenÂ Sheumas had arrived, it occurred to me that there was no piano inÂ this house. As I listened closely, I realized it was Laoiseâ€™s harp IÂ was hearing, chording along to the tunes like a Cape Breton piano.Â And never again would I worry about how an Irish musician wouldÂ make out at a party in Cape Breton with any kind of instrument.

I had been to quite a few parties at this house, with most of theÂ same people, but this one was different. Parties with this crowd ofÂ localsâ€”Gordie, Carlo, Matt, Stuartâ€”usually had a strong musicalÂ component. Playing music went pretty naturally with drinking andÂ smoking, and we were all pretty good at it by now. On this nightÂ though, there was a sense of discovery. The usual cast of charactersÂ had been infiltrated by an unknown cast of characters, and thereÂ was no easy way of knowing hosts from guests. The humour, music,Â and willful consumption were shared by all equally. And it allÂ centred around the music, which itself was elevated by the focus itÂ held in the room, among those playing around the table and thoseÂ standing at the edges. Although the players came from differentÂ countries and had as much in common musically as not, and theÂ collection of instrumentsâ€”guitar, harp, fiddle, accordion, hand-drumsâ€”was exotic by Cape Breton standards and not typical ofÂ the kind of session common to this kind of party, still there was aÂ sense of shared tradition. Tunes led by Laoise and Liz and Colette were picked up by Gordie and Stuart and Carlo, who infused themÂ with their own flavoursâ€”Carloâ€™s all-feeling soul and down-and-outÂ blues; Gordieâ€™s fresh absorption of traditional tunes plus his keenÂ sense of popular culture; Stuartâ€™s musical heritage and recent emergenceÂ into the world of his father, John Allan Cameron. It all addedÂ up on that night in Big Pond.

Long after everyone else had turned in for the nightâ€”with theÂ blinds drawn against the early morning sunâ€”Laoise and ColetteÂ called for one more â€œchoon,â€ but the few who were still resistingÂ sleep no longer possessed the faculties to take on such a task. AndÂ I donâ€™t think Laoise and Colette were much up to the task at thisÂ point either, just wanted to listen to someone else play. I did pickÂ up Coletteâ€™s accordion, but it wasnâ€™t long before I gave up. Finally Colette and Laoise went to bed and I went to sleep on the floor. And for me,Â the festival was really and truly under way.