Examining a painful past

“As a European-Canadian myself, I wondered: what the hell were we thinking about with this school? Why did it seem like a good idea?” he asks.

Knockwood’s Out of the Depths (Roseway Publishing, 1992), with its cover photo of the school engulfed in flames, shows the school from a survivor’s perspective. The cover of Benjamin’s book shows rows of students smiling for the camera while a nun stands in the background. This book is a forensic examination into the minds of the people who built and ran the school. 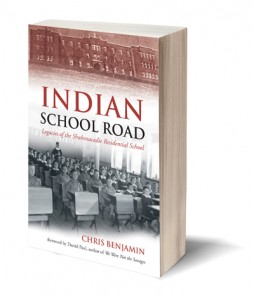 Indian School Road: Legacies of the Shubenacadie Residential School (Nimbus Publishing) marks a new direction for Benjamin. He’s written a novel, Drive-by Saviours (Fernwood Publishing, 2010) and the non-fiction Eco-Innovators (Nimbus Publishing, 2011), but this was his first historical book. He took the task seriously, digging deep into the archives to find the real-time voices of the people who built the school.

The idea started in 1844, when the Province of Canada (today’s Ontario and Quebec) began to separate First Nations children from their families and the “half-civilized” reserves to make them “Canadian.” Prime Minister John A. Macdonald later explained the broader goal was “to do away with the tribal system and assimilate the Indian people.”

“The goal was to make Indian men farmers and women homemakers. They felt that would finally civilize them and make them like us – make them true Canadians,” Benjamin explains.

The proposed solution to the “Indian problem” rolled out across Canada in the late 1800s, reaching the Maritimes in 1930.

Nova Scotia ignored reports that existing residential schools were killing half of their students through diseases like tuberculosis, poor conditions and child abuse. “They were horrible places of infestation, partly because they were poorly built and poorly funded. And yet they built Shubenacadie like every other school,” Benjamin says. “Indian Affairs had it in their mind that if they made [the children] into farmers, and modelled them after Europeans, then they would become like Europeans. That was the goal of the system.”

Indian agents scoured reserves and took children whose home situations they disapproved of. Benjamin says in some cases, the child appears to have been in genuine danger, but often it was cultural differences, or kids who disobeyed teachers at day schools, or orphans. “Over the years it became more and more of a penal [institution]. It was almost like juvie, where they sent kids that were acting up in class,” he says.

Some Mi’kmaq parents harnessed its fierce reputation as a boogeyman to frighten their kids into behaving better. At the school, the nuns prohibited the Mi’kmaw language, and never discussed Mi’kmaw culture, other than as a stain of shame. “It was about, ‘Act white. Be White. Stop being Mi’kmaq,” Benjamin says.

Over the three decades it was open (it closed in 1967), about 2,000 children attended the school. It failed to produce farmers or homemakers, and largely failed to make Mi’kmaq kids into Europeans – a blessing, many would say. But it caused deep damage. “I would say the people who left the school were pretty messed up by it. Everyone was different, but there was a legacy of personal problems.”

Many struggled with the legacy of sexual abuse and violence, and from being cut out of their families and culture at a very young age. Many adopted the motto heard often at the Truth and Reconciliation hearings: My revenge is to succeed. People like Knockwood, who became a distinguished academic and writer, and Rita Joe, whose poem “I Lost My Talk” opens Benjamin’s book.

Benjamin says the Mi’kmaq people he spoke to found healing in returning to their culture, in embracing the language and traditions. He wrote the book for the 95 per cent of Maritimers who aren’t Mi’kmaq.

“When I talk to white people about it, I find they’re generally sympathetic. They realize it was a terrible thing and it makes them sad to think about it. But if you flesh these conversations out too often, I end up hearing things like, ‘What Aboriginal People need to do is …’ I feel that’s missing the point. This whole thing came about from white people thinking they knew what aboriginal people should do with themselves.”

There never was an Indian problem, he says; it was always a European-Canadian problem. Benjamin argues that the school should be seen more a part of European-Nova Scotian history than Mi’kmaq history, and so white Maritimers should study it carefully.

“It’s the kind of self-education we need to do to be good citizens,” he concludes. “What we do about it once we know about it? Well, that’s for each of us to figure out.”

Top photo: But for rare occasions, the Shubenacadie Residential School was divided by gender. Photo credit: the Sisters of Charity Halifax Congregational Archives