Escape Hatch a Meticulous History of a Boondoggle with Benefits 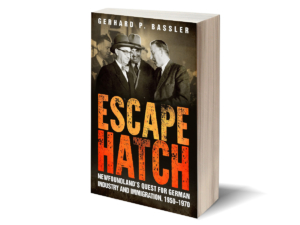 Joey Smallwood’s New Industries program has lived in infamy for about half a century and now Gerhard P. Bassler has set out to polish up its tarnished image. The professor emeritus at Memorial University dives into the economic development program that is little known outside of Newfoundland and Labrador. In 1950, Newfoundland had just joined Confederation and Premier Smallwood needed a big plan to industrialize an economy that was far too dependent on the fishery and other resource industries.

So he came with the clever plan to recruit ethnic German businessmen, skilled workers and capital to industrialize the Rock. West Germany was still recovering from the Second World War and many Germans were terrified of communism given that the Korean War had just broken out.

To help recruit these businessmen, Smallwood turned to Latvian émigré Alfred Valdmanis, an economist and businessman who was well connected in Germany. Armed with incentives from the provincial government, he went to work attracting investment and immigration from Germany and its neighbours. It was suspect work when you consider that rebuilding West Germany had strict capital controls in place at the time.

Bassler is a meticulous historian and he does nothing to gloss over the problems that occurred at the 17 companies that were founded by German industrialists. They created fewer jobs than expected, eventually went bust, and the government was left holding the bag for loans extended to their owners. There were challenges in integrating the roughly 1,000 German-speaking immigrants into Newfoundland society. There were scandals–Valdmanis was convicted of accepting kickbacks and spent 27 months in prison. One unpopular manager, Erich Van Bracht of Atlantic Gloves Ltd., was exposed as a former Nazi who had served on the staff of Reinhard Heydrick, one of the main architects of the Holocaust. Journalist Harold Horwood wrote in 1953 that the glove factory was “one of the few places on earth where the Nazi salute was still in vogue.”

And yet Bassler manages to find a silver lining to this economic cloud. He argues that many of the industries lasted longer than you would expect, given that half the publicly-traded companies have a life span of less than 10 years. Several of the companies, such as Atlantic Gypsum and Koch Shoes, were later transformed into other businesses under new management and thrived.

Bassler also looks at the broader social and cultural gains the province realized in accepting 1,000 German-speaking immigrants, many with descendants in Newfoundland and Labrador to this day. He conducted 100 interviews with these people, learned of the challenges they faced in settling in 1950s Newfoundland and how they found a home.

Peter Moreira is the founder of startup news site www.entrevestor.com. He is the author of Backwater: Nova Scotia's Economic Decline; Hemingway on the China Front; and The Jew Who Defeated Hitler. His novel, The Haight, will be published this year.