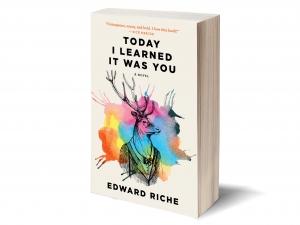 A retired actor-cum-security-guard is living in a park, and rumour has it he now identifies as a deer. A rookie St. John’s city councillor puts up with her idiot colleagues while feeling nostalgic for her native Venice and despairing over her husband’s dementia. Meanwhile, the mayor considers a run for federal office — if he doesn’t wind up torpedoing his own chances first.

In this keenly satirical and funny novel, Ed Riche spares nobody, from the good ol’ boy councillor whose accent gets stronger during televised meetings to the vegan activist who won’t perform a particular sex act “because of the animal protein.”

Riche piles up characters and situations — I lost track of the number of plots — building towards the circumstances that will inevitably cause everyone’s dreams and plans to collapse. There’s a bit of deus ex machina involved, but mostly events are driven by the characters’ own failures, lapses in judgment and just plain stupidity.

It’s a bit like following the Newfoundland energy boom that was in full swing when the book was written. You know it’s not going to turn out well. And, given the current state of venality and incompetence in Newfoundland politics, now is a fine time to read this book.