The Drip-Drip-Drip of Daily Life 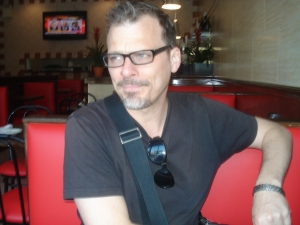 An interview with cartoonist Joe Ollmann

“I love to talk about me,” comics creator Joe Ollmann says in an email, when I ask if I can interview him about his book Happy Stories About Well-Adjusted People. But it seems to be a moment of passing bravado. When it comes time to set up a conversation, Ollmann asks if email would be OK, so he can “come off sounding brilliant instead of incoherent.” Our whole exchange is self-deprecating — perfectly in keeping with the persona he reveals in his introduction to the book.

Happy Stories About Well-Adjusted People includes Ollmann’s short stories collected from two books first published by Insomniac Press: Chewing on Tinfoil and This Will All End in Tears, along with two new stories.

Needless to say, Ollmann’s characters are not well-adjusted, and these are not happy stories. What they do is capture the slow drip-drip-drip of daily life in a way that feels as though we know Ollmann’s characters intimately. There are no grand visions, no big revelations. Yet these characters – a misanthropic, broke ventriloquist, a teen on a failing strawberry farm, a waitress at a diner in a dying northern mining town – stick with you long after you’ve met them.

Joe Ollmann: I’ve always been a short story freak. I was an obsessive collector of ghost story anthologies as a young man. Every story I ever wrote as a teenager was more loaded with irony than a can of spinach. I think that’s why all my endings are so vague and unresolved, as an apology for those days. I like the economy of conjuring a lot in very little space, evoking things without showing them by using the right suggestive word or image.

ABT: I felt as though I was reading these little individual bits of memoir or journals. I believed in these characters in a way that I rarely do. 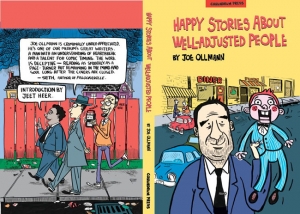 Ollmann: People have said that a lot to me, that they really believed these were real people’s problems, which is a great compliment. I don’t know how you do that. I guess the most important element to writing honestly is empathy. Empathy for humanity and for the characters you are writing. I was recently reading Lynn Coady’s The Antagonist, which is brilliant, and what struck me about the book was the fairness she treated all her characters with. They are all complex, nuanced individuals who do some bad things and some redeeming things and it makes for incredible realism.

ABT: Someone I know said he felt as though many of your characters were dealing with an undiagnosed mental illness.

Ollmann: I think that the human condition is varying degrees of undiagnosed mental illness, no? I’m just writing what I know I guess. I am drawn to the loveable sad-sack character and I like to write them at a stage of almost-change.

ABT: I’m really interested in your layout style. Nine panels per page, same size, every page. It seems like it emphasizes the stories as a series of moments: No big set-pieces, no splash panels, no grand gestures.

Ollmann: I use a nine-panel grid almost exclusively. Physically, it works for me as I am wordy and employ a lot narration, which fits nicely in the tall thin panel format. In a larger sense, I think of comics cinematically and the panels are the screen to me. The size and shape of a movie screen never changes. The camera pans or zooms and the focus changes within that uniform shape. That is just what makes sense to me. Perhaps I’m just lazy.

I like it when other people experiment with layout. That works for me as a reader — it just never occurs to me to do it myself.

ABT: How tempted were you to clean up the art in the older stories?

I resisted mostly, except for removing all ill-advised Photoshop motion blurs (shudder), and certain panels where people’s heads were so large it looked like they were wearing comical giant mascot head versions of themselves. I did MASSIVELY rework the lettering, which is always my weakest link in my work. It took weeks! And yes, it was even worse before.

ABT: Tell me about the book you just finished.

Ollmann: The Abominable Mr. Seabrook, a 300-page graphic novel biography of the Lost Generation explorer/writer William Seabrook. I’ve been researching it off and on for ten years and full-time for five. It will come out from Drawn & Quarterly in January 2017. Seabrook was a really fascinating guy: an alcoholic and a bondage enthusiast and a cannibal once — but I try and tell the whole story past the lurid bullet points of the guy’s life. He lived an incredible life, knew so many famous writers and artists, and was one of the best-selling, highest paid authors of his day. And today, he is virtually unknown.

This interview has been edited and condensed.