Mother-daugher duo team up to write a picture book 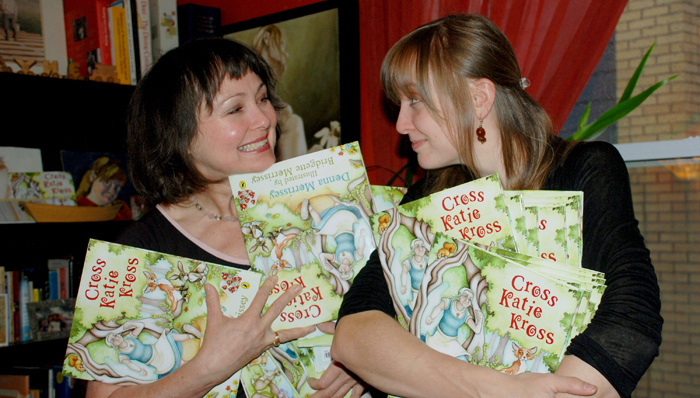 An author and a visual artist sit ’round the wood stove in their Halifax living room. This space is neither of their work studios, but oozes with their creativity nonetheless. Mother’s imaginative scribblings disguise a phone book cover and daughter’s paintings line rich red walls. A special box, just arrived, lies in the centre of the floor full of children’s books. For them, it has just set in: Cross Katie Kross (Penguin Random House), written by Donna Morrissey and illustrated by Bridgette Morrissey, has been released to the world.

Donna, the award-winning writer of Kit’s Law, and Bridgette, the painter of beloved dregs, both entered a new medium to create the highly anticipated picture book. “I was very shy of the process because I’m an established adult author and that can be very tricky when suddenly you’re doing a children’s book,” shares Donna. About 10 years ago, she dreamt she was a cross, old woman trying to find a utopian world called Love Valley. “It was me in the dream and it was all in animation. That’s what caught Bridgette’s fantasy.” 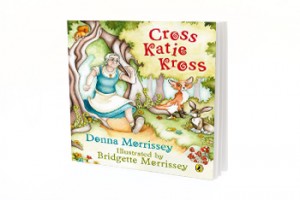 Bridgette proposed they turn the dream into a storybook. After sharing the idea with acclaimed children’s author Sheree Fitch, Donna got the peer support she needed. “I just went upstairs and I took the dream out and in three days I had it written”.

Next it was Bridgette’s turn to switch from oils on canvas to acrylics on paper. “The difficult task was when it became Bridgette’s turn”, shares Donna. “It was just an incredible process that went on forever…You talk! It was your nightmare,” she says, deferring to Bridgette.

“Everything was different,” Bridgette explains. “I paint from photos. I just blow them up to whatever scale and tweak them however I want. I’m very proficient at doing that. But, with illustration, there’s no photo. You have to just make it up.”

To deal with this challenge, Bridgette extended her studio into the outdoors and used her mother as a model for Katie Kross. Their escapades comprised of Ms. Donna Morrissey changing into costume in the bushes at Halifax’s Public Gardens, posing on one of the windy paths while pointing angrily at a stuffed bunny. In their backyard, she balanced on top of an overturned bucket while waving a broom. “Hmmm…What are they doing today? Oh…She’s dressed today. Oh…She’s waving a stick at her daughter. Oh, her daughter is still photographing her…That’s interesting,” Donna says reading her neighbours’ minds.

Back inside, Bridgette set to work for nearly two years to complete the enchanting illustrations. Her studio is on the main floor of their shared home. Other than a thriving plant she rescued, most of the room’s contents manifest past, present and future projects. “I only have work things in my room,” shares Bridgette. “I guess I keep my room a place of seriousness.” There are two easels and three painter’s palettes.  Some of the original Katie illustrations hang on the wall, reflective of her initial vision for blueish-green, surreal scenes. Lining a wooden mantel are six clay heads Bridgette molded to create three-dimensional versions of some of the book’s characters.

Donna’s writing studio is under the same roof. “Mother’s upstairs and daughter’s downstairs. The kitchen is a mutual territory,” laughs Bridgette. Inside Donna’s room, framed covers of some of the translated versions of her novels hang amidst a golden yellow backdrop. Dried lilac blossoms are juxtaposed against a computer, printer and other writing supplies. “My place is filled with everything,” Donna describes. “I’ve got angels dangling over my head. I’ve got good luck charms. I’ve got pictures of my mom, my brother, my niece…”

Downstairs, as Bridgette worked painstakingly to create illustrations for each of the picture book’s scenes, Donna daily “forced herself onto the racks” to complete her new novel to be released this September. Both mother and daughter roughly keep the same work hours, starting their day around 8 a.m. “We sometimes don’t even see each other for hours and hours,” says Donna. “We try not to, actually,” adds Bridgette. “When we overlap in the kitchen we enforce on each other not to bog down the other with our thoughts.”

However, the lonely and highly disciplined lifestyle of being your own boss sometimes takes a toll. The need for a short bit of companionship may not always coincide, however, with the other’s creative flow. “When I’m writing and I’m engrossed in something, it’s like suddenly Bridgette is having a coffee break,” shares Donna. “So it’s okay for her to suddenly wander into my room sipping with her coffee. And I say ‘Ah! Ah! Ah! Metaphor! Ah! Ah!’”.

While Bridgette was painting Cross Katie Kross, Donna was constantly curious. “I guess the biggest challenge to Bridgette is when I drag my friends in and go ‘Look, look, look! Come see what she’s doing now!’” proud mother exclaims. “She says, ‘Get out mom! Get out! Stop bringing your friends through!’ I would just be so excited and every picture she painted was my favourite.” Bridgette explains that they managed to adapt and work as synchronous artists.

The creative flow for both women is enhanced when they periodically step away. “Even though it seems like you’re not thinking about it, somehow in the back of your brain it’s percolating,” reveals Bridgette. “If you try too hard, then you start cutting yourself off from other ideas—you become too focused. Whereas sometimes, you need to just leave it and let it wander and then it’ll come back with different solutions.” Bridgette allows her imagination to stew while making homemade soup or going for a nice walk.

Donna also finds walking the streets of Halifax helps engage her writer’s mind. “Walking is when I visualize. Rhythm is what it is. I can do the same thing when I’m rocking, but more so when I’m out,” she shares. “Walking somehow gets the right brain going and the whole creative process happens. But of course, then you come back home and you have to write it down, and that’s where you have to go into left brain.”

Clearly, Donna and Bridgette have successfully collaborated, working as one while still maintaining their own artistic identities; and they have plans to complete another project together. Perhaps their professional chemistry stems from the time when Bridgette was six or seven and Donna would take her to Atlantic Place on the St. John’s waterfront. “Every Saturday morning, it was our favourite time,” muses Donna. “We’d go down to this place and she’d have all her crayons and markers. I used to have the paper or I was creative writing. So that pattern was established a long time ago.”

Cross Katie Kross encourages children, young and old, that happiness is within oneself—the Garden of Eden is the place where one stands. In this mother-daughter home of melding studios and creative crossovers, ultimately happiness seems to seep from every nook and cranny.