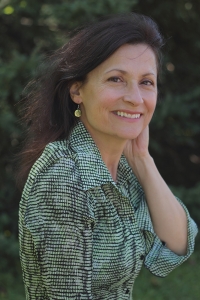 When Diane Carmel Léger was a child growing up in Memramcook, New Brunswick, she recalled seeing a dusty old print depicting the Expulsion of the Acadians. When she asked her teacher to explain to her what had happened, the teacher was almost as vague as the shadowy figures present in the print. “She explained it simply; that there was a war, that most people were sent away,” she says. Léger had many more questions, but her teacher couldn’t answer them.

Léger wanted answers. And when she found those answers while studying history at the Université de Moncton, she wanted to share them with as many people as possible. That led to the creation of La Butte à Pétard trilogy of books, and La Patate Cadeau (Piau’s Potato Present in the English version). These books bring young readers face-to-face with Acadian history, speaking to them, rather than at them.

Léger’s work has brought her many accolades throughout her career, including the 2006 Hackmatack Prize, which awards the creators of works aimed at young readers in Atlantic Canada. But she didn’t start writing books out of a selfish need for praise. “I had a baby while living in Victoria,” she says. “I thought she wouldn’t learn French, and I worried that she wouldn’t know about her ancestry.” Living in an Anglophone area—let alone one far from her geographic roots—Léger wanted her child to know that there was more to Acadian history than what was present in melodramatic poems, or tragic moments in history. “I wanted her to know that we’re still here, that we have something to contribute to the Canadian mosaic, and I wanted my kid to know the culture I had.”

Léger ended up writing La Butte à Pétard, naming the book after the area in Memramcook where she grew up, and where her Acadian ancestors had hidden during the Expulsio

n of the Acadians during the mid-1700s. Although many an Acadian story has dealt with the events, Léger wasn’t interested in focusing on “Le Grand Derangement”, but rather the resiliency it brought about in the Acadians. “It’s a story of survival, and a story that offers hope,” says Léger. “I think it shows that here is a people that had something very tragic happen to them, but today they are not resentful or vengeful. If they had been resentful, they would not have survived to this day.”

The proliferation of, and sense of pride found within, Acadian culture has exploded over the past few decades. At Bouton d’Or Acadie, publisher/owner Louise Imbeault is moved by the impact that Léger’s books have had in the lives of readers, both young and old. “People always mention the books to me with great admiration, and so many people tell me that they bought them for their own children, having read them as children,” she says. “Her books give her a springboard to bring history to life. Youth appreciate them greatly, since it’s one of the rare stories that speaks to them, of them.”

Léger’s work has had a lasting legacy because of the way she speaks to Acadian youth about their own history and culture. La Butte à Petard is now on its way to becoming a major motion picture, directed by someone who had grown up with and adored her book as a child. Her 2013 book, Piau’s Potato Present, is nominated for a Hackmatack. And her latest book, Mémère et Nannie, is coming out soon in French through Bouton d’Or Acadie and in English via Nimbus Publishing.

When asked how she feels about the climate for Acadian writers today, Léger is enthusiastic. “It’s the best time to be an Acadian author,” she says, laughing. “When I was a kid I thought my French wasn’t good enough, and my English wasn’t good enough, and I would never admit to anyone I wanted to be an author. But when Antonine Maillet won the Prix Goncourt in the 1970s, I knew I could do it.”

But for Diane Carmel Léger, the politics of language, and the legacy of history aren’t what is important to transmit to an audience. It’s about fostering future generations. “I’m proud to be Acadian, and what I am most proud of is not our literature, our music, or our food, but that we have forgiveness in our hearts,” she says. “I think there are a lot of countries and people who stay in the past. I hope that my books will be a lesson, as the same things are happening today, with people being deported. I know I speak to kids, but they grow up, and it may inspire them.”