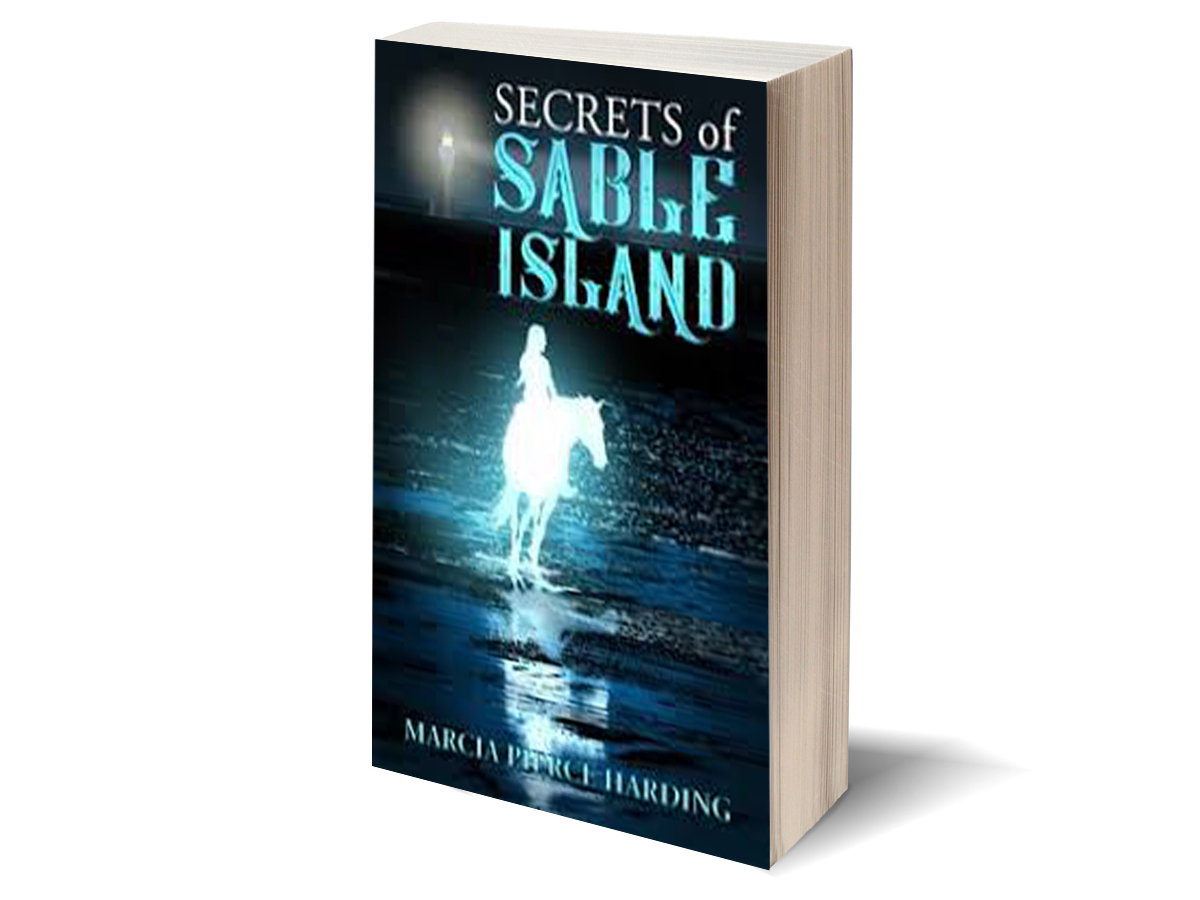 When I was in Grade 8, I read The Hand of Robin Squires by Joan Clarke—an adventure novel set on mysterious Oak Island in Nova Scotia in the 1700s. When I think about the novel as an adult, I remember the feelings of wonder and intrigue that developed as I read, and how much the setting in a local place—a place that I had never been but recognized in name and provincial proximity—meant to me as a young kid growing up in a rural New Brunswick.

It is that potential for connection and recognition that is most memorable about Marcia Pierce Harding’s Secrets of Sable Island. A historical novel set in 1904 in the aftermath of a large storm just off the coast of Sable Island, the plot follows two strangers, Caleb and Marin, as they enter young adulthood and are faced with a series of difficult situations. Caleb’s harrowing arrival on the shores of the island forces him to confront the loss of his family and navigate a series of demanding realities.

As Caleb ponders these dilemmas in hiding, on the other side of island Marin’s time in “her paradise” is threatened and she must confront her bad-tempered father, nurse her sick mother and stand up against a crew of men who threaten the livelihood of the infamous island horses. As the plot progresses, both Marin and Caleb gain independence and a sense of self through the help of others, and redefine the concepts of home and family to suit their specific situations.

Harding’s research efforts, attention to detail and passion for the subject matter show throughout the novel. There’s even a glossary of unfamiliar words and historical terminology. The development of the plot holds the reader’s attention through each sensational revelation. There are however some characters that remain underdeveloped and some dangling plotlines that leave the reader wanting. But the central relationship between Marin and Caleb progresses well as Harding weaves through emotional memories, complex revelations and contemporary troubles.

Harding has an eye for detail and touching descriptions. For example, when reflecting on his young life, Caleb laments:

“The black specks reminded him of his darkest days, the loss of his father and brother, his mother’s withering spirit, his own despair. Grains of grey were the humdrum days, the days that left no mark on his mind. But here and there, specks of silver sparkled with a brilliance that eclipsed all the rest, reminding of him of special moments, forever embedded in memory.”

While at times the nuance of Caleb and Marin’s maturation is lost due to the fast pace of the plot, small passages like this slow the reader down and allow them deeper access to the residents of the island. These moments allow for reflection on the events in the novel, and the constellation of secrets that lie at the heart of the plot begin to reveal themselves.

Importantly, the development of both Caleb and Marin offers young readers plenty to reflect upon and learn. Harding includes not only historical subject matter, such as the art of Scrimshaw, “a carving or engraving on whalebone, whale ivory, walrus tusk,” but also life lessons, as Norse notes:

“It takes patience and perseverance to master the art, the same qualities you need to succeed in life.”

In these moments of guidance, the inclusion of historical fact and hand-drawn maps, and various references to classic literary texts and mythology, Harding’s background as an educator shows through. As the narrative progresses, Secrets of Sable Island is a wonderful balance of fact and fiction that respects the intelligence of its young readers, while also making clear that storytellers must “never let the truth get in the way of a good story.”

Gemma Marr (she/her) was born and raised in rural New Brunswick. After over a decade away, she is excited to return to the province to teach in the Department of Humanities and Languages at the University of New Brunswick Saint John. Her research focuses on the intersections of place, gender and sexuality in Atlantic Canadian literature and culture. She is an avid reader and writer who enjoys books from a range of genres and styles.