Lisa Doucet Reviews The Rise and Fall of Derek Cowell 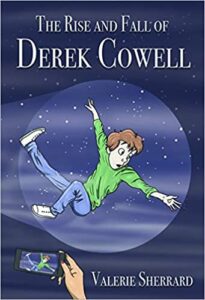 Derek Cowell secretly believes that he possesses the power of invisibility, which is his attempt to put a positive spin on the fact that he seems to be routinely overlooked or forgotten or ignored by pretty much everyone. He is more than a little shocked when he suddenly finds himself to be an internet sensation after he unwittingly photo bombs a group selfie of his sister and her friends.

Miraculously, he keeps stumbling into odd photo moments that perpetuate this newfound popularity.  While he doesn’t mind the attention, he also knows full well that it won’t last, but his best friend Steve believes they should seize the opportunity to keep the momentum going. When he reveals his plan, Derek knows it’s a bad idea. As it turns out, he is more right about that than he ever could have imagined.

New Brunswick author Valerie Sherrard’s latest middle grade saga is a warm and witty romp that features an affable protagonist whose misdventures are believable and engaging. Derek’s descriptions of his sisters (and growing up in a house full of them) are highly entertaining, while perfectly capturing the drama and chaos of everyday family life.

Derek is a sympathetic and likable main character, and the secondary characters are true-to-life and well-drawn. His best friend Steve is an amusing sidekick and Sherrard realistically portrays both his character and the friendship between he and Derek.

Similarly, despite Derek’s descriptions of his father as being somewhat hapless, when Derek finds himself in a wee bit of trouble with the police, his parents are both convincingly concerned yet supportive, and his mother proves to be a surprising ally when he has questions about a girl. The author also successfully depicts the modern middle-school setting and the fickle nature of fame, especially among teens.

Derek is surprisingly astute in recognizing that “this too shall pass,” whether it is his insta-fame or his absolute humiliation when an extremely embarrassing photo makes the rounds. The author manages to point out that even when it seems to Derek like everyone is talking about him, the truth is that many people haven’t seen the photo or don’t care about it if they have, a useful though difficult thing to remember for anyone who is in the midst of personal trials.

Sherrard has created another captivating tale of family life and middle-school angst, filled with humour and heart.