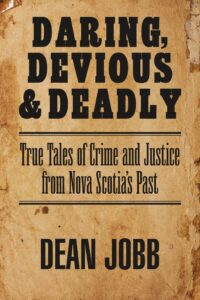 The name says it all in Dean Jobb’s latest contribution to the true crime genre: Daring, Devious and Deadly: True Tales of Crime and Justice from Nova Scotia’s Past. It’s an all-encompassing work that covers just about any crime you can imagine from libel and larceny to murder and mutiny.

The book is divided into sections focusing on particular facets of historical crime and of the legal system which subsequently springs into action. One section talks about crimes at sea, another about disasters; one focusses on the court system, another on evidence. Equal, if not more, attention is paid to the prosecution of the crimes than to the crimes themselves and it’s here where, quite often, the truly quirky bits of the story are played out.

Reading this book really brings home how much crime investigation has changed in the face of modern scientific developments. There is one mention of a forensic investigation, but for the most part trying to get to the bottom of a case basically involved sifting human testimony and then deciding whether or not you believed what the witness or defendant had to say.

In one particular case from 1854, the jury had to determine whether a man had been murdered in his upstairs hotel room or jumped out of the window. Although a doctor declared that his injuries were the result of being beaten, the conflicting testimonies of the people involved was the major factor in the trial.

Eventually, the judge told the jury that the victim’s death “is enveloped in mystery—so entire and so complete that human judgement is baffled … I have therefore to recommend gentlemen that you return a verdict of not guilty.” They did as they were instructed without ever leaving the courtroom.

At other times, the case rests on a single, obvious piece of evidence. Thus, in a murder trial dating back to 1838, the suspect was convicted because he was in possession of the victim’s wallet. No other evidence seemed necessary, especially since he had a shifty appearance, a reasonable indication of guilt in earlier days.

Perhaps not just in earlier days. A simple recounting of facts would be deadly dry, but in a book like this there’s little room for elaboration. To bring the stories to life, Jobb tries to give the flavour of the people he writes about without taking up too much valuable real estate. Characters are quickly sketched in to give a hint of the whole. One lawyer is tagged simply as “a short, stout man with a full beard,” leaving the reader to draw what conclusions they wish.

That same lack of space may leave readers wondering about the circumstances surrounding some of the cases, or the people involved. A chapter about the trial of the men in charge of the ships that triggered the Halifax Explosion opens with the statement that “Benjamin Russell was only half-dressed when an explosion shook his Halifax rooming house and shattered its windows.”

Russell was a Supreme Court judge who heard the appeal of the original verdict. So, what was such a respectable and well-to-do member of society doing living in a boarding house?

One of the charms of the book is its small glimpses into how little some things have changed—people’s motivations and reactions to wrong-doing just like our own—and how much other things have changed. Magistrates prior to the 1900s were expected to impose court costs to pay their own way, for example. Defendants weren’t allowed to testify since courts routinely assumed they would lie.

Daring, Devious and Deadly is an apt title. The book does indeed contain examples of all three types of crime. There’s a wholesale slaughter at sea, a long running and lucrative embezzlement swindle at a venerable bank and a whole bunch of murders.

All of these cases are presented in an engaging manner that keeps the reader turning the page and wondering what dastardly deed will be exposed next. Crime may not always pay, but as Jobb has proved over a lifetime of writing, it’s usually fun to read about.