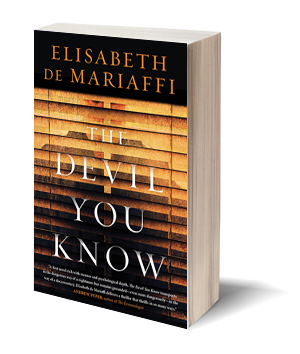 In her debut novel The Devil You Know, Elisabeth de Mariaffi, whose previous book How to Get Along With Women was long-listed for the Giller Prize, follows rookie reporter Evie Jones as she digs into the abduction and murder of her childhood friend, 11-year-old Lianne Gagnon.

The novel is set in 1993. The Scarborough Rapist, Paul Bernardo, has just been apprehended. He’s also the suspect in several high-profile murders. As we’re introduced to Evie Jones, her editor has assigned her the mundane tasks of sifting through newspaper microfiche and of watching forensics comb Bernardo’s house. All this time alone gets her thinking about her long-dead friend, and she starts asking some troubling questions which still persist. How was her killer able to elude police? Is he still out there, somewhere?

The Devil You Know weaves together several strands of converging narrative. But the novel is at its most successful when Evie is away from the action. De Mariaffi’s description of a newbie crime reporter on the beat is nothing less than convincing. “I’d just spent my weekend watching his house from inside the locked doors of a blue hatchback. The part of the job my mother hates, on my behalf.”  In fact, she should be applauded for not getting bogged down in gory details. Her central fixation is how Lianne’s death still haunts her; Bernardo’s crimes are just the jumping off point.

The Devil You Know isn’t without its faults. The introduction of Evie’s stalker is the kind of ill-placed red herring which many thrillers could do without. But the novel remains a successful crime thriller because of its balanced approach. In interviews, de Mariaffi has talked about growing up in the shadow of the Scarborough Rapist. Considering her personal connection to the subject matter, it’s a brave piece of writing.