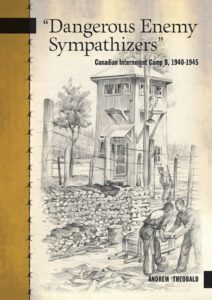 Erwin Schild was there at a Jewish seminary in Wurzburg, Germany that dreadful night of murder and wanton destruction that was to become known as “Crystal Night.” Rioters were destroying Jewish homes, hospitals and synagogues, and brutally murdering more than 91 Jews throughout Germany, Austria and the German-occupied portion of Czechoslovakia. Police, obeying Gestapo orders, looked the other way.

Although an innocent, peace-loving, 20-year-old rabbinical student, Schild was dragged away to Dachau, outside of Munich, soon to become one of Nazi Germany’s notorious death camps.

Walter Igersheimer, a schoolboy from Frankfurt, also left Germany for England the year Hitler became chancellor. By May 1940, at aged 23, he was about to complete medical studies at London’s St. Mary’s Hospital and join the Royal Army Medical Corps.

Louis Philipp Fran Spanier also fled his homeland when Adolf Hitler seized dictatorial powers. He settled in Holland and worked in a factory, which manufactured defence equipment for Britain and France, until May 1940, when the Nazi Army swept though the country during its Blitzkrieg invasion.

As German soldiers closed in on the Netherlands, Spanier fled the country in a small rowboat. He was machine-gunned and bombed by enemy vessels. After four days adrift at sea, he was taken aboard a British submarine.

These Jewish men, and hundreds more like them, had more in common than a universal fear of Hitler. As German jack boots goose-stepped across Luxembourg, Belgium and Holland, and as France teetered on the verge of surrender, expatriates of German, Austrian and Czechoslovakian origin who resided in the United Kingdom were widely perceived as potential Nazi spies, saboteurs or Fifth Columnists ready to set the stage for a German invasion.

With only the English Channel separating Britain from the advancing Nazi forces, these victims of war were summarily rounded up by police and classified as “enemy aliens” instead of as war refugees, their true status.

Theobald, who holds a PhD from Queen’s University, documents how these men were arrested, sent across the submarine-infested Atlantic on the same ships as hardened Nazi prisoners of war. At sea, the Germans, under the umbrella of the Geneva Conventions, received better ship-board treatment than the so-called “enemy aliens.” German prisoners of war, housed in upper decks, had a reasonable chance of survival if the ship were torpedoed. The innocent Jewish refugees, locked far below deck, had little chance of escape.

After a brief internment in Quebec, more than 700 Jewish men aged 16 to 64 were escorted aboard a mystery train with windows nailed shut, and transported to Ripples, New Brunswick, a remote location about 15 kilometres east of Fredericton. At a rail crossing in the deep forests, they were met by Canadian guards armed with bayonet-tipped rifles and Mounted Policemen on motorcycles.

Theobald, who grew up in Saint John and holds history degrees from the University of New Brunswick at Mount Allison University, tells how these men were held behind barbed wire for nearly a year at a former relief camp, established to keep unemployed men out of trouble in the growing hobo jungles of the Great Depression.

The site, known as Camp B, had been hastily converted into an internment camp, after British officials decided that Canada, with its wide-open spaces, would make escape difficult for Nazi sympathizers. Britain, largely dependent on the importation of goods by ship during the Battle of the Atlantic, also considered Canada, with its more secure food supply, as having been better able to feed prisoners. Britain was also reeling from its staggering military casualties of the recent evacuation of Dunkirk, France, and did not want to spare soldiers for internment camp duties.

At Ripple, immigrants, an ocean away from home and family, did not have access to lawyers or the right to appeal their detention.

Even Rabbi Erwin Schild – who had suffered seven years of Nazi abuse and debasement in Germany and barely got out with his life from the notorious Dachau Nazi Concentration Camp – was considered a security risk. He and the 700 or so others, mostly European Jews, were held behind barbed wire and observed round the clock by armed sentries posted high in guard towers.

They were forced to wear the same blue denim prison-style work clothing issued to captive Nazi soldiers, sailors and airmen held in high-security POW camps elsewhere in Canada. Red circles had been dyed into the fabric on the back of their shirts, making them an easy target for marksman in the event of an escape.

The high-level security continued despite the fact that the expanse of dense black-fly infested woodland surrounding the compound was deterrent enough to prevent escapes for older men and the scholarly youth accustomed to a more sedentary life in study halls and cafes of Europe.

To prevent idleness, control dissatisfaction and provide a routine for the internees, they were marched out into the woods to fell trees and cut firewood needed in the basic sheds that served as their barracks. Guards referred to as “scouts” passed through their crowded sleeping quarters for unannounced inspections at any hour night or day.

For relatively minor offences, internees could be put into solitary confinement in very tight spaces that could be cold or damp in winter or hot and humid in summer. Their bathroom was a bucket that was dumped once a day.

“They can take everything away from us except our talent, our joy of music, and our capacity for mocking ourselves,” said Walter Igersheimer, the London medical school student that British authorities felt better suited to  languishing behind Canadian barbed wire than serving with the Royal Army Medical Corps.

Their musical life centred around a number of highly acclaimed European-trained musicians, including John Newmark, who was destined for a storied carrier as a concert pianist and long-time accompanist for famed Canadian contralto Maureen Forrester. School and college courses were conducted, often with the guidance of the nearby University of New Brunswick. Painters painted and artisans crafted souvenirs from scraps of wood and metal.

Guarding the often younger, better educated and more sophisticated internees were members of the Veterans Guard of Canada. They were middle-aged veterans of the First World War who had seen close friends slaughtered and maimed by German and Austrian machine guns and artillery. Initially, many of these battle-scarred veterans thought if the internees spoke German, they must be German and were therefore a threat.

But as time went on, there was an evolution of mutual respect between guards and the guarded. Overall, Theobald concludes that the guards and administration, which was largely made up of New Brunswickers, “reacted to the often-confusing circumstances” with “compassion and laudable fair-mindedness.”

However, Erwin Schild did point out that the customs and rituals of the secular Jews amidst the camp population “created bewilderment” in the Canadian military mindset of the times and could uncork “the evil genie of anti-Jewish prejudice.”

Camp doctor F Munroe Bourne, making sure to claim “I’m tolerant of the race,” expressed concern if his young replacement turned out to be Jewish that he might be badly treated by his less-enlightened colleagues. “I realized that one Jew has a hard time in any mess, but particularly in the mess of a Jewish internment camp,” he wrote in his diary.

Captain Bourne’s thoughts, in tandem with those of Immigration Minister FC Blair, who did so much to curb immigration as to make his title an oxymoron, “illustrate the majority attitude towards Jews in Canada in 1941,” Theobald concludes.

The unjustly labelled “enemy aliens” saw some of the stigma removed from their status by July 1, 1941, when they were reclassified by Canadian officials as “refugees.”

Many Camp B internees returned to Britain to serve as military pioneers, soldiers assigned to build the bridges, roads and defensive infrastructure needed to support the infantry. Others were transferred to internment facilities elsewhere in Canada. By this time, the Holocaust was underway and many Jewish internees did not learn the fate of their friends and loved ones until long after the war was over, if ever.

After the war, Erwin Schild went on to become the highly respected rabbi of the Adath Israel Congregation in Toronto. Walter Igersheimer became an eminent psychiatrist in the United States. He wrote later in life that his “unjust incarceration” made him a strong supporter of human rights and minority groups.

Six of the Camp B alumnus, including Rabbi Schild and John Newmark, were appointed to the Order of Canada. A theoretical chemist named Walter Kohen shared the 1998 Nobel Prize in chemistry. The list included acclaimed journalists, authors, inventors, a number of accomplished musicians and university professors.

After their departure, the camp took responsibility for holding Canadians opposed to the war effort — including home-grown fascists and men of German and Italian descent — as well as captured enemy merchant mariners.

Perhaps the greatest takeaway from Theobald’s book is the reminder that the seeds or fascism were being sewn in Canada in the years leading up to the Second World War. Montreal journalist Adrien Arcand is described as “a charismatic leader of a small band of home-grown fascists” known as the National Union Party. Displaying Nazi insignia and propagating Hitler’s anti-Semitic propaganda, the NPU had a paramilitary wing assigned to intimidate and provoke brawls with leftists and Jews.

Arrested in May of 1940, Arcand remained unrepentant even after serving five years behind Canadian barbed wire, much of it at Ripples. In post-war years, Arcand went on to mentor Holocaust denier Ernst Zündel, nurturing “a nucleus of hatred that remains disturbingly present today,” Theobald observes.

John Cunningham is a retired journalist and amateur military historian whose latest book "Where Duty Lies, a New Brunswick Soldier in the Trenches of World War I" was the winner of the 2019 Democracy 250 Atlantic Book Award for Historical Writing.