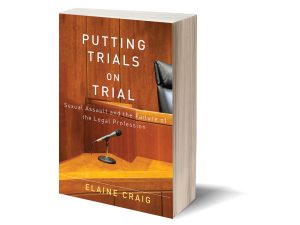 I remember sitting at my kitchen table when the verdict of the Jian Ghomeshi trial was announced on CBC. When the news reader said not guilty my phone started buzzing. Emails started coming in. Friends and colleagues began checking in with one another, first in disbelief, then in a panic and finally in resignation.

Why, in a country with some of the most robust rape shield laws in the world, do fewer than one percent of sexual assaults result in legal sanction for the perpetrators? Why, in Canada, do more than ninety percent of sexual assaults go unreported? According to the meticulous and unflinching work of Professor Elaine Craig the answer is this: the process is unnecessarily and, sometimes, unlawfully punitive towards the complainants.

Putting Trials on Trial: Sexual Assault and the Failure of the Legal Profession was, as other reviewers have noted, written and researched prior to the most recent deluge of public attention around systemic sexual harassment and assault. Craig, an associate professor at Dalhousie University’s Schulich School of Law, conducted her exhaustive research before #MeToo gained viral traction and before the development of the legal fund #TimesUp.

And yet, Craig’s case studies are contemporary: not a single case examined occurred prior to 2009. Indeed, the cases Craig unpacks are in great part the material of headline news: the alleged sexual assaults by Jian Ghomeshi, the legal failings of Judge Greg Lenehan in his proceeding over the Halifax taxi driver assault case, the disciplinary action taken against former Justice Robin Camp for his behaviour in a sexual assault trial in Alberta. As Craig outlines in her introduction, the justice system in Canada does not protect the most vulnerable. Rather, in many cases the justice system compounds violence.

In clear, concise language Craig explains how, despite changes to the legal system in the 1970s and 1980s, complainants’ experiences in the courtroom have not been eased. Instead, in example after example, Craig demonstrates that reporting sexual assault and pursuing legal action compounds a complainant’s trauma. Drawing directly from trial transcripts, Craig shows the ways in which defense lawyers rely on tactics of aggression that often cross lines of legality. Page after page of carefully documented evidence demonstrates that if you experience sexual assault and attempt to seek justice in Canada through the legal system you are almost certainly going to experience the opposite. Take, for example, a quote from a Crown attorney interviewed as a part of a 2013 study on the effects of the Victim Impact Statement:

I did not want it to happen this way but it went down that I had a prostitute complainant not show up for court, and I had her arrested on the street that night where she worked so that she could come and testify. She sure as hell wasn’t sticking around to file a [Victim Impact Statement] afterwards.

This is but one of the scores of astonishing pieces of evidence Craig offers to demonstrate the ways in which the system fails complainants at nearly every level. From the various ways in which the Crown fails complainants, to the near-systemic damage caused by trial judges who fail to protect complainants from being attacked on the stand, to the calculated tactics of re-traumatization used and passed down by defense lawyers, there is no denying that the system is broken.

If chapters outlining the fissures in the profession itself—the defense-counsel myths, the failures of the Crown and Juridical error—are somehow not enough to convince readers that we are in a justice crisis in Canada, consider this: Craig asked all of the criminal defense lawyers she interviewed the same question. “If you or someone you cared about were sexually assaulted, would you recommend reporting it and pursuing criminal conviction?”

Almost all of the lawyers interviewed said no, they would not advise loved ones to seek justice through the legal system.

This is a devastating book in both its form and its content. What is perhaps most devastating is Craig’s methodology. Her research and writing are even keeled. At no point does she demand change.

Instead, through evidence-based research, she presents the system as it is. It is up to those working within the system to implement changes to make it what it should and could be: a place to seek and find justice.

Erin Wunker is a writer and teacher. She teaches and researches in the field of Canadian literatures at Dalhousie University and she is author of the non-fiction essay collection Notes From a Feminist Killjoy: Essays on Everyday LIfe.